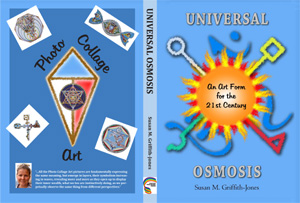 As an avid photographer, Susan Griffith-Jones has been shooting ‘marvellous’ visions of places and people all over the globe.

Her love of the art of photography is here combined with contemplation of the various techniques and universal spiritual truths of existence taught to her by her Spiritual Masters that over the years she has come to display the meanings of in large, symbolic pictures that contain many photos in mosaic.

Laid upon a base of ply board covered with coloured cloth, particular shapes to highlight certain meanings are then cut out from cardboard and again covered with varying colours of cloth and stuck down upon that base. Photos that have been carefully chosen within a certain theme are then placed upon those shapes to enhance their meanings, ultimately making up one whole shape of sacred geometrical significance, as well as emanating the energy of sacred power spots to the beholder, due to their careful positioning.

Calling this technique ‘Photo Collage Art’, Susan’s first book on this art form, ‘Universal Osmosis’  is going to be an autobiographical work on the journey she passed along to create these kinds of pictures.

The book especially focuses on the people who inspired her, many of the synchronous occurrences that influenced how she developed the content and themes for each picture, as well as the intricate meanings of all 5 of these first pieces that make up Series 1 of her work that she displayed at her exhibition, ‘Universal Osmosis’, London, UK, October-November 2016.

The ‘Photo Collage Art’ pieces … included in this book are:

Ganga, Life of A River 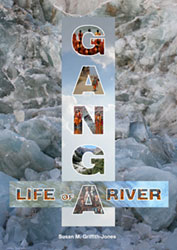 Since 2007, Susan has been visiting various sections of the River Ganga, and both filming and photographing them.

Her extensive 13 year work on the river has lead her all the way from Ganga’s traditional source at Gaumukh, Gangotri down to Sagar Island, beyond Kolkata, where River Ganga meets the Bay of Bengal.

Woven into stories about her own journey along the river, as an undertone this book comments on historical, geographical, social, religious and environmental aspects of the River Ganges, but is polished off with deeper spiritual truths that are embedded into lessons learned along the way.

‘Visions of Bosnia, a book about Kaleidoscopic Filmmaking’ 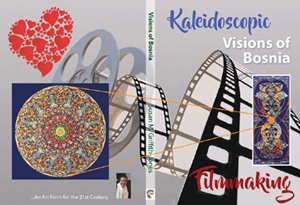 Susan’s up and coming book, ‘Visions of Bosnia, a book about Kaleidoscopic Filmmaking’ tells the story of how she was invited to Bosnia by Sam Osmanagich, the discoverer of the Bosnian Pyramids, to make an artistic documentary on the Bosnian Pyramid Complex.

Starting from the very first time she ever heard about the place and continuing to describe how she synchronistically met Sam in India and then went to visit the Bosnian pyramids three times over three consecutive years, within the narrative she particularly goes into much detail about how she actually went about producing the movie, ‘Visions of Bosnia’.

In order to determine the layout of the movie, she first needed to discover and subsequently make 2 Photo Collage Art pieces through examining the Bosnian Pyramid Complex at many different levels.

Using prominent symbols within both of these intricate pieces that themselves contain hidden meanings of universal truth in their makeup, she describes many facets of the Bosnian Pyramid Complex within their very structure.

Once infused into the very fabric of the movie as its timing, visuals, narration and music, these symbolic pictures become an integral part of it so that they may transmit the frequencies of universal symbolic truths that are contained within the pictures themselves, directly to the viewer upon watching the movie.

Although Susan has previously made films using these methods, after making ‘Visions of Bosnia’ she gave this art form the name, ‘Kaleidoscopic Filmmaking’, defining it in a way that she has not done with her other works, namely, 'Circle of Immortality', the making of which is described in her book, ‘The Living Pyramid’, as well as her films 'The Golden Bridge' and 'Crossing Bridges'.

This is the story of Ganga, of life and death, of wondrous magic and of healing. Having already made 3 movies on River Ganges in Northern India, Susan is now starting the process of creating a new photo collage art piece, whose shape and internal make up will be embedded into the timeline of both a comprehensive movie on the whole River Ganges as well as shorter movies that reflect different aspects of activities along her banks. Following the art form, ‘Kaleidoscopic Filmmaking’, the frequencies of Universal Symbolic Truths that will be infused into the newly created photo collage art piece are transmitted through the movie to the viewer through skilful use of timing, visuals, narration and music whilst making the movie.

Firstly a film script will be written, based on the story told in ‘Drops of Being’ , which will subsequently be turned into a feature film. 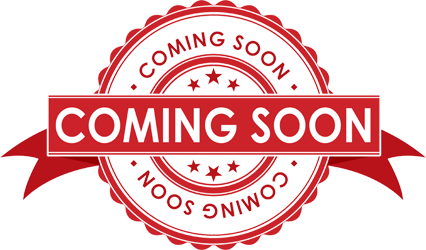 Susan is now creating her 8th photo collage art piece, whose shape and internal make up will be embedded into both a comprehensive movie on the River Ganges, as well as into shorter clips of it, segments that will reflect different aspects of her through visuals of various places along the River.

In the early stages of developing it, the questions that she’s had to appraise before coming up with the design have been regarding the major symbol that will emerge, which theme of photos to use, as well as an undercurrent of wisdom to expose through the precise use of each shape, their colours and angles in the picture.

The journey that Susan has already followed to uncover the deeper meaning has led her to the ancient symbol of the Chakana cross that is now ready to be placed into a Photo Collage Art piece, that within its very belly will contain a whirling Phi ratio vortex leading to the ground state of being, at its very centre.

Eventually the movements within this shape will be embedded into the timeline of her Ganga movie, so that the transmission of these essential meanings may automatically occur to the person watching it.

Making an actual 3D model of ‘The Magician’s Jewel’

After many months of working with a computer generated picture of ‘The Magician’s Jewel’, describing it verbally to various people, then writing down the meaning in a summarised form from a longer written working draft, Susan is now making it into a 3D model out of basic materials, such as wood and cardboard, to refine her understanding of how this piece may actually be assembled.

Her main aim in doing this is to understand how to construct the piece, whereby she intends to:

• highlight each of the proportions for all of its main shapes,
• find out at which distance the shapes should be placed from one another,
• understand the various angles of their positioning,
• investigate which materials may be suitable for a prototype of the actual device.

The other purpose of the exercise is to discover a workable trail that participants will follow around the structure, get a deeper understanding of how the mechanism of the installation will actually work as an active device, then ultimately contact those who have the skills to assist in this process.