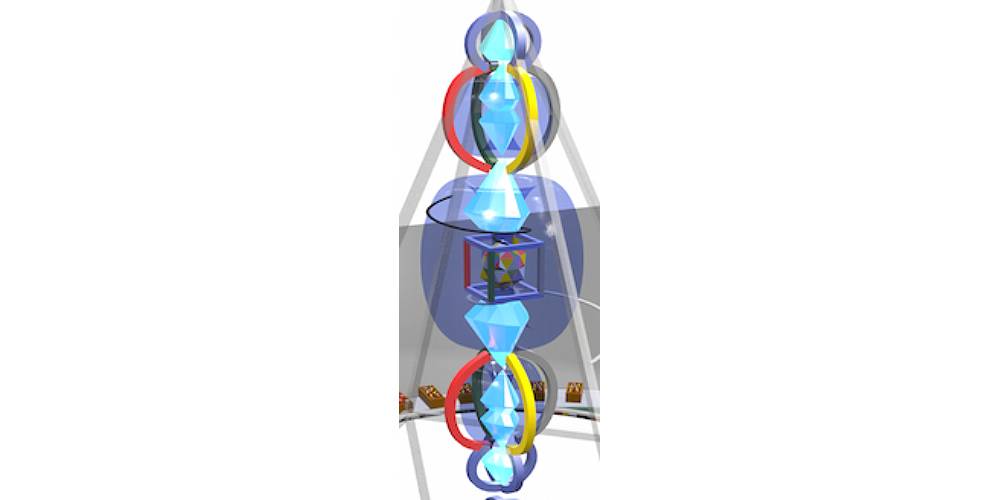 The ‘Crystal of Time’ photo collage art piece was created by Susan Griffith-Jones in 2019.

As a symbol of mind and its mechanisms, this entire shape of Crystal of Time symbolically describes the process of conversion of waves of the Hertzian electro-magnetic spectrum, into Longitudinal ones beyond the speed of light.

Here, Hertzian transverse waves correlate to Consciousness experiencing the various, ordinary states of mind that operate within certain bandwidths of frequency lower than the speed of light that take Time and Effort to process, each corresponding action of a thought, creating a reaction.

On the other hand, once converted to its Longitudinal wave potential, Consciousness experiences aspects of Universal qualities ‘beyond’ the speed of light, as properties of Light itself, such as Wisdom, Compassion, Bliss, Clarity, etc… that manifest instantly without any effort, movement or time factor, appearing everywhere, immediately.

‘Crystal of Time’ thus dynamically shows how we may transcend the ordinary thought process and subsequently infuse appearance with Universal qualities.

Further to this, while independently making the picture, ‘Crystal of Time’, Susan realised that this was the very shape that she needed to embed into a movie about the Valley of the Pyramids, in Bosnia that Sam Osmanagich, the discoverer of the Pyramids in Visoko, near Sarajevo, was asking her to make.

With this in mind she made several attempts to put together the film and although making good headway with research, was unable to find any structure that worked in the actual layout of the movie…

….until discovering that there was another whole Photo Collage Art picture to make before she could put the movie together!

‘Diamond lens, Doorway to Infinity’ photo collage art picture was born and with it very soon afterwards, the first version of her movie, ‘Visions of Bosnia’.

During the process of designing ‘Crystal of Time’ photo collage art piece that is a large picture made on the flat surface of cloth covered plyboard, Susan was already thinking about modifying it into a 3D installation piece, that could also potentially be a device.

But what energetic function could it perform?

Asking around amongst people who were talking about such things at the Summer Solstice Conferences she attended for 3 consecutive years (2017-2019), near Sarajevo, Bosnia, several ideas abounded.

These include it being a healing capacitor, an electrode, a scalar antenna, a Standing Columnar Wave, a cathode, a resonator, all viable options if coupled with the right technical expertise to execute it, people with acute knowledge of materials and testing methods to collectively transform ‘Crystal of Time’ into a functioning machine.

Then while designing ‘The Magician’s Jewel’ in early 2021, a 3-dimensional version of ‘Crystal of Time’ became the central part of it that she named, ‘The Divine Vajra’, that holds the actual mechanism of ‘Diamond Lens, Doorway to Infinity’ as an operating infinite toroidal field, at its centre.

Computer graphics of ‘The Divine Vajra’

‘The Divine Vajra’, a 3D version of the ‘Crystal of Time’ forms the inner part of ‘The Magician’s Jewel’.

Holding the traditional symbolism of a Tibetan Master’s ritual Dorje/Vajra instrument within its design, ‘The Divine Vajra’ spans the central axis of ‘The Magician’s Jewel’, not only as its motor, but also as a device that may create vertical Standing Columnar Waves that interact with the carefully designed park forming a Solitron Wave horizontal grid, surrounding the central structure of ‘The Magician’s Jewel’.

In order to outline the intricate shapes within her new photo collage art picture, ‘Eye of Awareness’, which is the lock that the key of ‘The Divine Vajra’ must precisely fit into, Susan now needs to understand the structural details of the ‘The Divine Vajra’.

To do this, Susan is attempting to build a small prototype of it, as a Conscious Installation Device, using conductive materials and precious stones.

Some aspects of it that are being more keenly investigated are that: