Originals are HANDMADE with a base of ply board covered with cloth, shapes of cloth covered cardboard laid out in order, with photos cut to size on top.

Process of Emergence of Crystal of Time: 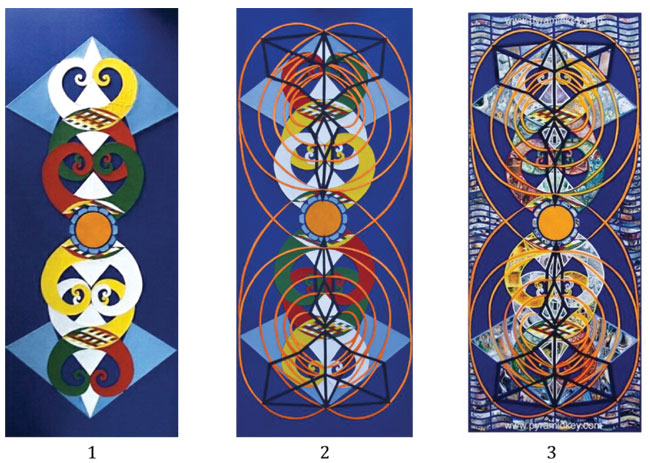 The base of the picture resembles the Tibetan Master’s ritual object, a 5-pointed Vajra, which symbolises the union of source energy, as Awareness and Emptiness. 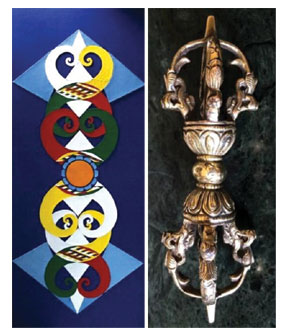 Eight small white crystals run along the whole length of the picture, representing one octave of harmonic resonance, an octave being 7 tones, plus the final one, which is the original note in a higher scale.

Two large light blue crystals cap each end of the picture, representing both the fifth element of Space, as well as having the shape of a pyramid, which both enhances the energy contained within the image, as well as helps contain it.

The pincer-like, spiralling coloured shapes that run through the entire picture, represent the 4 elements of Air, Fire, Water and Earth and are designed in perfect Fibonacci spiral golden ratio proportions, so as to weave throughout the picture, creating a looping effect.

The entire shape expresses this process, making ‘Crystal of Time’ into a kind of capacitor, which on the one hand could be created into an external device, but on the other hand is also subjectively our Mind or rather, Consciousness itself. In this sense, Hertzian transverse waves may be correlated with Consciousness experiencing various ordinary human mind states of worldly existence operating within certain bands of frequency lower than the speed of light, taking Time and Effort to process, whereas longitudinal waves describe Consciousness experiencing aspects of Universal qualities ‘beyond’ those, as properties of Light itself (wisdom, compassion, bliss, clarity, etc…) that manifest instantly as a mere pulsation, without any effort, movement or time factor.

In this sense, ‘Crystal of Time’ dynamically shows how we may transcend the ordinary thought process.

The Circle of Immortality: 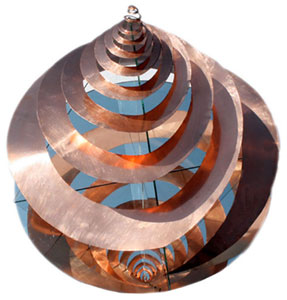 ‘The Circle of Immortality’ art piece

A full description of the meaning of ‘The Circle of Immortality’ art piece may be read in ‘The Pyramid Spiral, Dance of the Five Elements’.

Here, ‘The Circle of Immortality’ art pieces resemble the ‘Crystal of Time’ picture, which is also depicting the transfer of transverse waves into longitudinal waves. Here, through 60 degree vortices, a longitudinal wave occurs at the point where the apexes of the spirals come into contact with one another. Here, a pulse of energy, as shown in ‘Diamond Lens, Doorway to Infinity’ comes into being.

This central golden circle is the heart and mechanism of the piece and is fully described by the picture, ‘Diamond Lens, Doorway to Infinity’ https://www.pyramidkey.com/diamond-lens-doorway-to-infinity/, which is a picture magnifying this essential space in full. Like a wormhole embracing and giving access to 13 dimensional levels, here in ‘Crystal of Time’, we only see the final level, our supreme essence of pure Light (as a union of Awareness and Emptiness).

The theme of the pictures here is ‘Serpentine’ Beings, which matches the overall emphasis on sound, resonance and human subtle energies. In this case, there are photos of dragons, Nagas, snakes and other creatures considered as Naga Beings taken all over the world, particularly in China, South East Asia (Vietnam, Cambodia and Thailand), India, Central and South America, Egypt and the Balkan region, as well as ley lines and ancient stone circles in the UK.

The 2 extra lines down the centre of the picture:

Having completed ‘Crystal of Time’ in March 2019, Susan sent the final version to Dr Ibrahim Karim, founder of the science of Biogemetry, who recommended her to add 2 small lines along the central axis of the picture, saying,

“In order to raise its overall vibration to a higher level, so that energy vibrating from the combination of shapes and lines in the picture is harmonising the time energy pulse at all levels of biological functions, achieving a holistic healing effect, by adding the two strokes, the reflection of the time pulse radiating towards the viewer is balanced, achieving a centering spiritual energy quality, as in sacred power spots.”

A series of presentations on ‘Crystal of Time’:

In chronological order, Susan describes how ‘Crystal of Time’ emerged over several years in a series of presentations from February to April 2020, to a Biogeometry group in San Francisco and how she subsequently embedded it into the timeline of a movie she’s been making about the Pyramid Complex in Bosnia.

This process and topics that are discussed in these presentations are described, as follows:

At Susan’s 2016 ‘Universal Osmosis’ exhibition of her photo collage art in London, UK, a participant asked Susan what her next picture would be, to which she replied, “A Dragon Face”.

For a presentation at the 2017 Kailash International Conference, Susan wrote a paper on Naga Beings and their relationship to Mount Kailash/Manosarovar in particular.

Spirals; as a symbol of the dragon, her art piece ‘Circle of Immortality’ in relation to Perception, Awareness and Appearances, Time, the toroidal shape and golden ratio Phi angle regarding self-reference, figure of 8 as infinity.

Other aspects of Crystal of Time described here include the Number 9, double tetrahedron and 5 elements, 4 of the elements being mixed up to represent the 64 possible combinations of ACGT as triple codons in DNA as the Nagas within, Pythagorean Tetrad, Octaves of harmonic resonance, Consciousness as Awareness and Perception, Fractals as thumbprints of creation, a fractal process becoming a 3D dragon shape, which also looks like The Caduceus.

2.  ‘Visions of Bosnia 3’ that may be seen at: https://youtu.be/ApSUQkVVfRk

Meeting Dr Karim and the science of Biogeometry, the 5 pronged Vajra – a ritual object used by Tibetan Buddhist masters to pacify and destroy, in the sense of bringing vibrations which are out of balance, back into balance – as the entire shape of the picture.

Pi in relation to octaves of harmonic resonance, the genetic code is a biochemical manifestation of the hermetic code, Mirrors, Crystal of Time as a Scalar antenna, Fractality and heart harmonics, Standing waves, Resonance.

Finding some crucial information in ‘The Living Pyramid’, putting that together with information already embedded in Crystal of Time, how to put the circles together, making the base of the picture, whose working title was ‘Indestructible Drop, Doorway to Infinity’, E8 and quasicrystals.

A previous layout for the Bosnian Movie, emerging cycle of perception into material substance and subsequent dissolution,

The Caduceus, Pyramid Energy, Tachion Energy, The Kybalion – the secret book of Hermetic Philosophy, 7 laws of the Hermetica, Orgone Energy,

Layout for the Bosnian movie: pertinent numbers, making symbols for each aspect of the ‘Crystal of Time’ picture, creating section layouts with the symbols, giving them a coherent order, timing of visuals, 2 Fibonacci spirals for the music layout, timing of music, synopsis of intended layout for Bosnian movie.