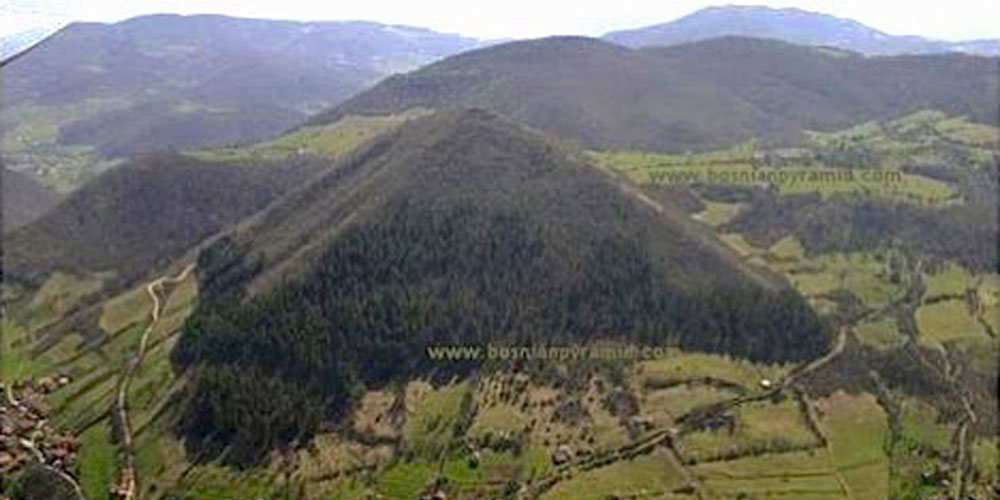 Susan met Sam Osmanagich, discoverer of the Bosnian pyramids at a conference at Pyramid Valley near Bangalore, India in 2016. After seeing Susan’s film, ‘Circle of Immortality’, Sam invited her to come to Bosnia to make a “movie like that” there.

It proved to be a ‘switching tracks’ moment for Susan’s work on a number of levels, as everything about the Pyramid complex in the Visoko Valley of Bosnia and the avant-garde people that she met there, who are thinking way outside of the box, would not only challenge her to embrace the multi-dimensional vision required to do justice to Sam’s request, but also take her into a world of advanced scientific knowledge. 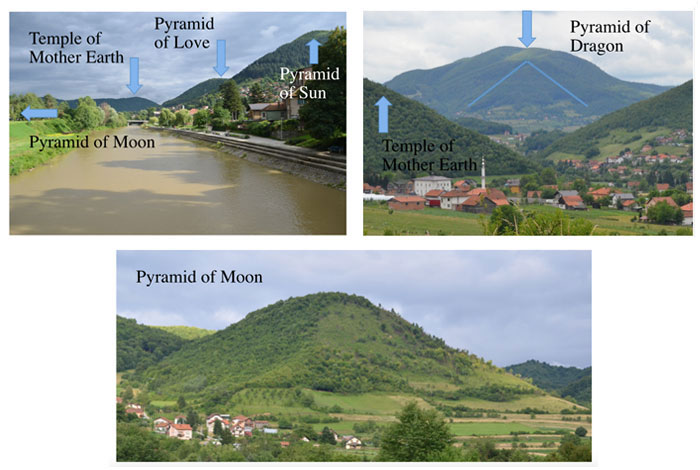 Visoko Valley of the Bosnian Pyramids

After visiting the Visoko Valley of the Bosnian Pyramids for 3 consecutive years (2017, 2018 and 2019), Susan created two large Photo Collage Art pictures that held the symbols, sequences and time specifications she would need to build her Bosnian film, section by section.

‘Diamond Lens, Doorway to Infinity’ and ‘Crystal of Time’

‘Diamond Lens, Doorway to Infinity’ is the central golden circle that expresses the inner workings of ‘Crystal of Time’, and comprise the first two pictures of Series II of Susan’s Photo Collage Art pieces.

Created through careful examination of various multi-dimensional facets of the Bosnian Pyramid Complex site and synchronistic occurrences during the same time period, these two pictures were embedded into the structure of the film, ‘Visions of Bosnia’, and could thus actually perform the function of emanating to the viewer what visitors to the pyramids, tumuli, underground tunnels, Ravne Park et environs, both see, understand and feel when they visit this extraordinary place, which was Susan’s intention in the beginning.

‘Visions of Bosnia’ may be viewed at:

Visions of Bosnia’ is an example of Susan’s greater artistic genre of work, ‘Kaleidoscopic Filmmaking’.

Here, she constructs shapes into whole pictures that have been carefully designed to emanate both a holistic meaning in relation to the relevant subject at large, as well as actually refract beneficial harmonic frequencies into the movie by carefully reproducing them and embedding them into its structure using the skilful methods of filmmaking, in terms of visuals, music, narration and timing, in order to directly transmit the inherent meaning directly to the viewer.

Quotes from several people who have seen the movie:

Thank you for the wonderful full length documentary movie about the pyramids, tunnels, Bosnia and people who gravitate to the energy of the place.

I see circles, they turn into the spiral, which transforms to energy vortex (like DNA strains), with no chronology but all events from future and past coming to one point.

Faces we know and we don’t, those who’re with us and no longer with but above us, roses and grass, objects, mountains, sky, statements from known and unknown, vortex of life.

I wish I’m there. Wait, what am I saying, I go there every day. I just need everyone else.

If I was a professional movie critic, this is what I would say:

With this movie Susan has made a masterpiece, she has managed to weave together the magic, the love, the science, the human experience and the multi-dimensional levels of consciousness that you find in these areas of Bosnia. Moving us deep into our hearts as we watch the dance of joy filled expressions and heartfelt togetherness…just as a True New Organic World is meant to be.

Susan, thank you, I so loved it, I was crying, laughing, had goose bumps…. it brought me straight into the truest part of my heart…

The way you weave together the trueness of life. The science and the experience of something more, the true beauty of expressing our humanness and soul, the spiral of life…

The entire energy in the movie is that of utter pure love, such a sacred moment to be allowed to watch and feel….

What can I say.. I just loved it…its the best movie from that area I have seen, as you managed to capture the true magic, what we really feel when there…

In the video below, Susan clarifies the step-by-step process of how she embedded ‘Crystal of Time’ and ‘Diamond Lens, Doorway to Infinity’ into the ‘Visions of Bosnia’ movie, in relation to methods of ‘Kaleidoscopic Filmmaking’.

Over several months at the start of 2020, Susan also gave 5 consecutive Power Point Presentations on the Bosnian pyramids to a Biogeometry group in San Francisco, USA:

A synopsis on the Bosnian pyramid site:

Interpreting the Bosnian Pyramids into ‘Crystal of Time’ and ‘Diamond lens, Doorway to Infinity’:

Transforming the Photo Collage Art pictures into the ‘Visions of Bosnia’ movie:

Next edition of ‘Visions of Bosnia’

The current rhythm and layout of ‘Visions of Bosnia’ has so far been defined by embedding the first 2 pictures in Series II of Susan’s photo collage art pieces, ‘Crystal of Time’ and ‘Diamond Lens, Doorway to Infinity’ , into the timeline of the movie.

After a year and a half of contemplating its shape and internal make up, and having discovered a way to display the interlinking layers of portals of our entire chakra system that contain many shapes, numbers, angles and resonance coming together as a multi-dimensional vortex, Susan is about to start laying down her new photo collage art piece, ‘Eye of Awareness’ , which will be the third and final picture in Series II.

Completing this triptych of three photo collage art pieces that knit together the meaning of ‘Puma Punku Puti’ = ‘Key to the Gate of the Cougar’, words whispered to Susan in the ancient Quechuan language during a moment of silence, the central part of ‘Eye of Awareness’ is the place where the ‘Key’ (the 3D device aspect of ‘Crystal of Time’) containing the ‘Gate’ (the infinite toroidal fractal field of ‘Diamond Lens, Doorway to Infinity’ device), fits perfectly into its own lock, the ‘Eye of Awareness’, the ‘Cougar’, whose spirit animal in South American native tradition represents relevant states of perception that guard the inter-dimensional portals of mind.

Using her own principles of ‘Kaleidoscopic Filmmaking‘ to expose each of the main energetic aspects of the three pictures, in this next edition of ‘Visions of Bosnia’ movie, ‘Eye of Awareness’ will be added into the current timeline like a vortex of movement pushing from the centre outwards in waves pulsating across a medium where the visuals will gather in crests and troughs as if moving within a surface.

To do this, Susan will pulsate concentric circles out from the central point of the already methodically laid out movie, back to its start and forwards to its end, using the correct spatial measurements of the cube root of Pi that defines the increasing distance between the rippling circles, each of which will also mark the boundaries of the different layers of the chakra vortices, thus infusing the movie with a pulsation of universal energy that appears everywhere, immediately.