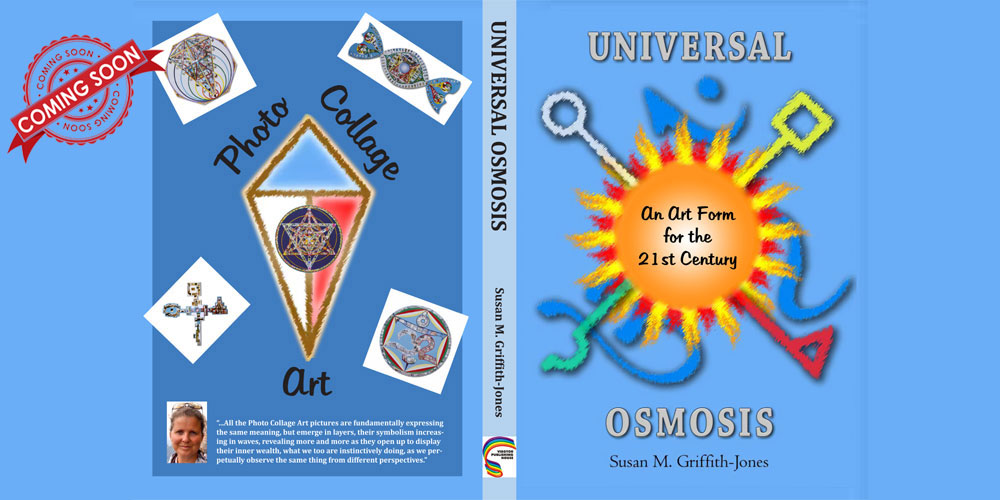 As an avid photographer, Susan Griffith-Jones has been shooting ‘marvellous’ visions of places and people all over the globe.

Her love of the art of photography is here combined with contemplation of the various techniques and universal spiritual truths of existence taught to her by her Spiritual Masters that over the years she has come to display the meanings of in large, symbolic pictures that contain many photos in mosaic.

Laid upon a base of ply board covered with coloured cloth, particular shapes to highlight certain meanings are then cut out from cardboard and again covered with varying colours of cloth and stuck down upon that base. Photos that have been carefully chosen within a certain theme are then placed upon those shapes to enhance their meanings, ultimately making up one whole shape of sacred geometrical significance, as well as emanating the energy of sacred power spots to the beholder, due to their careful positioning.

Calling this technique ‘Photo Collage Art’, Susan’s first book on this art form, ‘Universal Osmosis’ is going to be an autobiographical work on the journey she passed along to create these kinds of pictures.

The book especially focuses on the people who inspired her, many of the synchronous occurrences that influenced how she developed the content and themes for each picture, as well as the intricate meanings of all 5 of these first pieces that make up Series 1 of her work that she displayed at her exhibition, ‘Universal Osmosis’, London, UK, October-November 2016.

The ‘Photo Collage Art’ pieces … included in this book are: