‘The Golden Bridge’ is the first of Susan’s series of Kaleidoscopic Filmmaking, artistic documentaries about The River Ganges.

After some time ‘The Golden Bridge’ movie was re-edited into ‘Crossing Bridges’.

Its theme remains that of healing, but here in ‘Crossing Bridges’, the visuals of Ganga from her source at Gaumukh to Haridwar where she enters the Plains of North India, are reversed so the flow of the river is moving upstream from Haridwar back to Gaumukh.

Between 2007 – 2011, when Susan was making ‘The Golden Bridge’ and ‘Crossing Bridges’, she had not yet thought up the process of ‘Kaleidoscopic Filmmaking‘. However, ‘Crossing Bridges’ is nevertheless packed with many essential meanings of our existence, which are transmitted through the ordinary channels of filmmaking.

During this time, Susan also developed ‘Mirror of Space‘ photo collage art piece, but whereas she used meanings behind the picture in the movie’s layout, she did not actually embed this shape into the timeline of the movie, which is a practise that really defines ‘Kaleidoscopic Filmmaking‘ as an art form for the 21st Century. 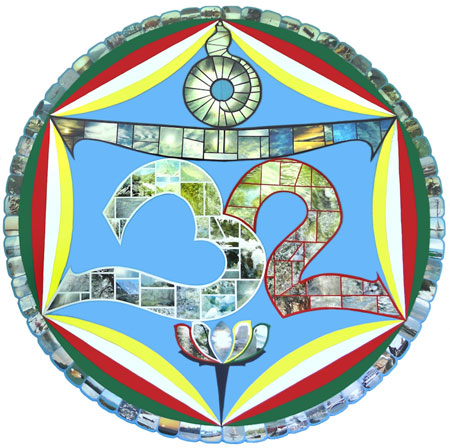 ‘Crossing Bridges’ has a pre-planned outline, which takes the shape of a suspension bridge that is divided into 5 segments with near-mirrored timing. In this case, sections 1 and 5 and 2 and 4 mirror each other, whereas section 3 has its own mirror around its central part. Oscillating from Dr Dass healing his patients constituting sections 1, 3 and 5, and sections 2 and 4, which show views and activities along River Ganga, the movie has both consistent timing and visuals set throughout. ‘Crossing Bridges’ is a film about healing. Using visuals of a touch-healer doctor, Dr Mulk Raj Dass giving treatment to his patients at his clinic in Mussoorie, interspersed with diverse landscapes and activities along the banks of the uppermost stretch of River Ganges from Haridwar to her source at Gaumukh, the film explores many different layers of meaning for ‘healing’.

Both actual and metaphorical images of bridges, along with an explanatory narration depict how essential the meaning of bridge is to the overall sense of healing. For bringing two sides together and joining what is separated by un-obstructing what is currently obstructed is the way that healing ultimately takes place. 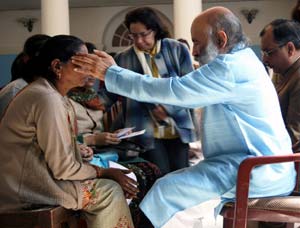 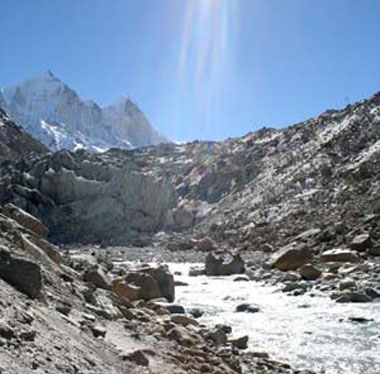 Whereas River Ganga represents an actual manifest bodily channel of energy that flows as water along a path of least resistance from source to the ocean across many different obstacles, the doctor represents a channel of healing for invisible pure source energy to reach the recipient patient.

Ultimately, we are all capable of becoming such a channel and the message of the film is to show that if we create the necessary free flow of energy through our body, there is nothing strange nor magical about humans healing humans through touch, as the healing process is an ordinary practise that our human mechanism is capable of performing.

Susan went to Kathmandu, Nepal to visit ‘The Sound Planetarium’ where they make Tibetan Singing Bowls, whose sounds correspond to those of the planets. Each planet has a predominant quality, which can be either Peaceful of Wrathful depending on the metals being used to make the bowls. Susan then chose 25 bowls of varying qualities, which Peter of ‘The Sound Planetarium’, played at a sound recording studio, in Kathmandu.

As a result of research, certain sounds and frequencies have been allocated to certain frequencies of planets, planetary movements, planetary orbits and orbit frequencies. Such sounds as these can be used as the basis for sound therapy, music and meditations, helping people to harmonise with our entire cosmos. Using the same vibrations that the cosmos emits from the planets enables the healer to realign these unseen forces in an individual, creating a natural balance of their chakras and a feeling of harmony with the universe.

These planet bowls are born out of the creative capacities of the ancient arts of the craftsmen of Asia. Each one is unique and the composition of their inherent sounds is also unique.

By meditating with the aid of such primordial sounds, and by placing the Planet Bowls on the body, the primordial sounds of the cosmos can vibrate throughout the entire body. The effect is that we can then connect with our universe, creating harmony within us and within our place in the cosmos.

Back at home in India, Susan then put together a track of vibrating tones of Tibetan singing bowls, according to their emotional and technical association with planetary movements. These make up the accompanying tune to the visuals, corresponding to certain characteristics and moods in the film, as well as the value of their frequencies to unobstruct and rebalance the energy in our inner channels.

Achieving the emphasis in different sections of the movie, the underlying flow of sound vibration thus takes us from disorder and imbalance at its start, to transformation and healing, at the end.

This means that theoretically, a flow of vibration of sound taking us from one state (disorder) to another (health) has been embedded into the flow of sound from the beginning to end of the movie. This is a strong feature of Kaleidoscopic Filmmaking but Susan hadn’t yet coined this name for the way she was laying out her artistic documentaries.

GANGA, RESCUING A RIVER IN DISTRESS

In 2008, Susan was invited to follow a group of activists on their journey to halt some key developments on River Ganga in her Upper Reaches that may irrevocably damage the ecosystem of that area and consequently that of the whole River.

“…Group met around noon at Hari-ki-Pauri, the main ghat of Haridwar. Anshul Sheekunj, the main officer of the place took the group to a room where there’s an interesting stone marble design, like a face to the left of the main shrine.

Anshul tells us that today is the birthday of Ganga, a special day to be meeting in this special place. Conversations about the cultural value of the river as the foundation of Vedic civilisation, the selfish nature of damming the river, manmade structures and planning that’s destroying the river and the fact they are all projects where few benefit and many suffer, ensue.

Like the special mysterious X factor bacteriophage that exists in Ganga’s waters making her the healer, so we too resolve to spread the message of saving Ganga far and wide, infecting others with the cause, turning apathetic views into ones of activity and dedication…”

From the Notes of Pani Morcha yatra 11.05.08, Haridwar, North India

Susan depicts the journey of the group stage by stage from Gangotri to Haridwar, filming them along the way, hearing the different issues raised by them along the river. 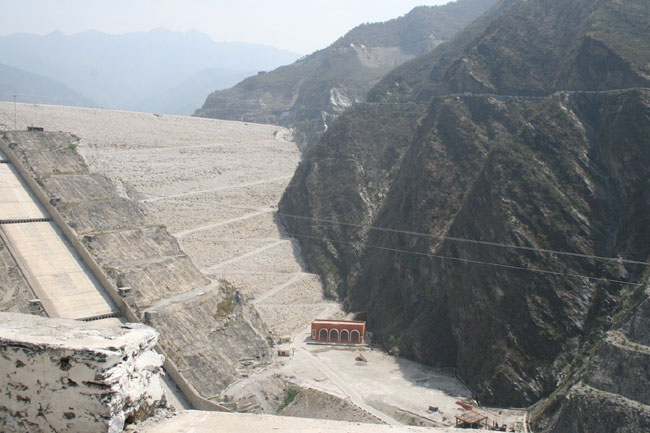 After much pressure by different bodies, the Lohari Nagpala project that was threatening to destroy the natural form of the Baghirati valley and shown in some detail here in this movie, was stopped by the government in 2010, ‘due to religious and environmental reasons’.

This film is not really a Kaleidoscopic Film. It does not have any particular shape embedded into it, only a logical flow of information occurring from place to place, which also flows in a logical way.

But from the point of view of being another kind of research into Ganga and her overall story, making this film is an integral part of Susan’s greater up and coming Ganga project, to document the entire river into a most intricate piece of Kaleidoscopic Filmmaking.

UP AND COMING FILMS ABOUT RIVER GANGA

Since 2007, Susan has been visiting various sections of the River Ganga and both filming and photographing them.

Her extensive 13-year work on the river has led her from Ganga’s traditional source at Gaumukh, Gangotri in the Indian state of Uttarakhand high up in the Himalayas, down to Sagar Island where River Ganga meets the Bay of Bengal, beyond Kolkata.

This is the story of Ganga, of life and death, of connection to our multi-dimensional realities and of wondrous magic and healing.

Like beads on one whole necklace, a series of short movies containing the key meanings of existence will demonstrate Ganga’s holistic universal meaning. Including dynamics such as the nature of birth, life, death and beyond to a natural state of being, the movies will be purposefully laid out to shine deeper spiritual truths to viewers through an organic process of osmosis.

All the information about what and how to lay out the movies is already symbolically embedded inside ‘The Magician’s Jewel’, a Conscious Installation Device that contains all the necessary information to transmit frequencies of universal symbolic truths to the viewer through a skilful management of timing, visuals, narration and music that will be laid across the timelines of a series of movies according to Susan’s art form of ‘Kaleidoscopic Filmmaking’.

In order to do this, Susan will take different sections of the ‘Bardo Thodol’  – ‘The Tibetan Book of the Dead’, a masterpiece of knowledge on the nature of existence, each part of which relates to one or another section of ‘The Magician’s Jewel’, and spanning the entire stretch of Ganga from source to mouth and back again, weave these universal truths into stories about her own journey along the river and the lessons she learned along the way.

Susan will depict how Ganga is a flow of energy, matching various large settlements along her path with our own chakras, as portals of different intensity of vibration that may carry us from one to another conscious dimensional state, representing different qualities of mind according to their position within an octave of harmonic resonance.