After completing the first ‘Visions of Bosnia’ movie, Susan, in a flash of inspiration saw that all of her Photo Collage Art pieces making up Series I and II, collections of her work from the last 16 years plus ‘The Circle of Immortality’ art piece, may themselves be individual devices, or even more poignantly, individual parts of one whole device.

This became a hypothesis that she tested while assembling the individual parts of them together into a 3D computer graphic design, merging them into a greater device, each of their encoded shapes and symbols holding embedded information about our connection to Universal Wisdom inside every facet of it.

It was with this realisation that ‘The Magician’s Jewel’ sprung out of the blue in early 2021 along with this new section of the website entitled, ‘Installations’.

The Magician’s Jewel comprises a set of 3 layers that are intricately wrapped up, one within the other;

The toroidal field dictates the Universal tune as it evolves its potential part by part, knowing the tune, the order in which the parts have to activate, the sensual manifestation of the whole of existence as a continuously played symphony, which forms the beat, the timing of the performance.

The ‘Circle of Immortality’ art piece forms the outer spiral of ‘The Magician’s Jewel’ that also reflects into the mirror at its base. A question for future observance will be to see if, like the transformation of ‘Circle of Immortality’ into its device aspect, adding another internally placed mirror to the apex of ‘The Magician’s Jewel’ would cause it to be a more complete device.

It may be that ‘The Magician’s Jewel’ will become the structure of a series of Kaleidoscopic films that Susan is about to produce, on River Ganga.

Summary of The Magician’s Jewel

‘The Magician’s Jewel’ is a unique threefold combination of form (shape), sound (vibration) and charge (light). Comprising a surrounding park-style layout, its central structure that is positioned at its middle is large enough to allow participants to comfortably move around on, as well as within its inner chambers that are perfectly mirrored into the ground below it giving the impression of there being another whole space, which is nevertheless illusory. 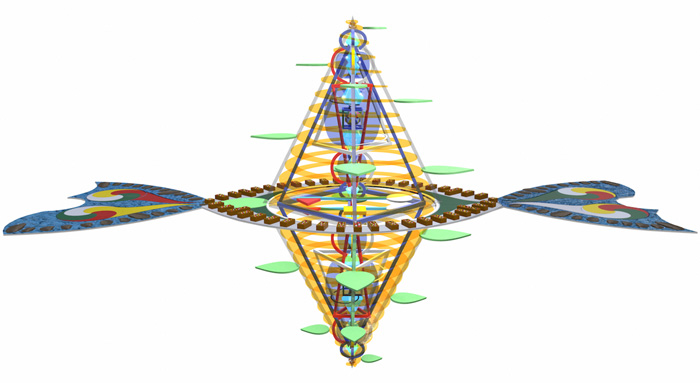 Computer generated image of ‘The Magician’s Jewel’, without floor attached

Following the stage by stage process of existence described in ‘Bardo Thodol’ (The Tibetan Book of the Dead – TBOD) of the great Indian saint, Guru Padmasambhava and using Augmented and Virtual Reality to enhance the experience, participants meet challenges at each stage of its outer, inner and secret sections, passing through labyrinths and crossing hurdles, finally reaching a simulation of the very heart essence of our being at its centre.

Photo Collage and Installation Art within ‘The Magician’s Jewel’

Uniting within one installation piece, the various layers of ‘The Magician’s Jewel’ are based on carefully measured shapes, angles and vibratory information included in:

Certain aspects of each of these explicit designs carrying relevant information in symbolic form have been carefully combined into a fully immersive and interactive experience called ‘The Magician’s Jewel’ to strongly inspire, heartily impact and directly transmit universal laws to participants.

The Threefold Symmetry within ‘The Magician’s Jewel’

While directly experiencing myriad frequencies, their symbiotic relationship with appearance and resultant charge, when moving through ‘The Magician’s Jewel’, participants bask in a triple set of resonance designed to re-tune our natural biological energy system into a state of harmony and balance.

Acting in micro-resonance with all 3 layers of our physical body, subtle energy and consciousness and in macro-resonance with the environment surrounding us, here a symmetry of 9 octaves of harmonic resonance and 9 layers of mirror-image nested Platonic solids hold the energy of the structure in a way that allows a process of phase conjugate implosion of charge to occur at the heart of this installation, causing a reversal of entropy. 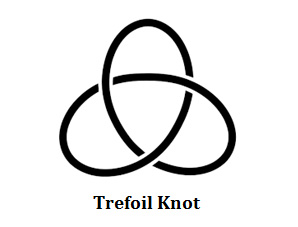 Like a trefoil knot holding perpetual spin, an infinite compression of these 3 layers of charge, sound and form self-perpetuates around a centre that contains an ultimate field of unified potential, the union of these 3 varying fields of energy, collated into one.

Summary of stages mentioned in Tibetan Book of the Dead

1/ Bardo of Life – the period of time between birth and meeting a cause that will lead to death that inside of it holds 2 other aspects:

3/ Bardo of Reality – the ground nature of mind

Bringing you back in a circular way to

Rhythm of ‘Bardo Thodol’ (TBOD) within ‘The Magician’s Jewel’

Operating within scale harmonics, three keynotes ‘open out’ into 3 octaves, having 7 notes each, the 8th of the preceding octave being the 1st of next.

Each of the 3 octaves has active, passive and neutral aspects, creating 9 octaves in total. 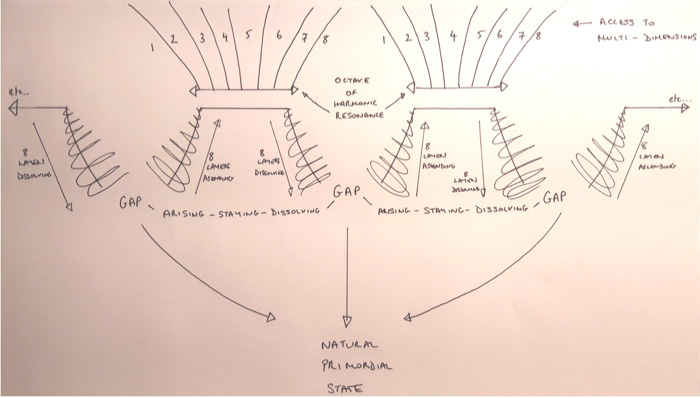 The 4 parts of ‘The Magician’s Jewel’ 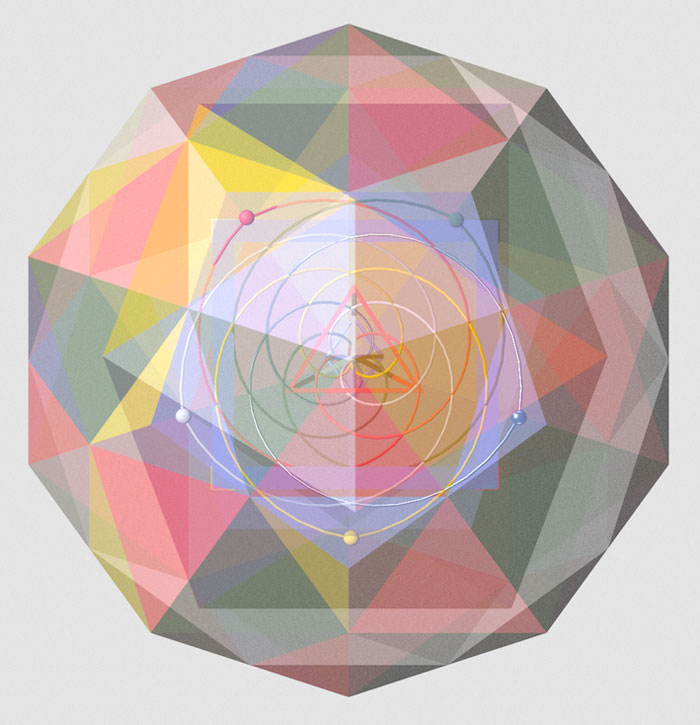 The Magician’s Jewel as a Conscious Installation Device

In addition to experiencing the process of existence through following the various stages mentioned in TBOD, as a whole, ‘The Magician’s Jewel’ is a Conscious Installation Device.

Along with carefully designed aspects of light and sound, in order to produce the necessary effects to create a device of such capacity, the structure of ‘The Magician’s Jewel’ is largely made of metals and precious stones that contain the highest levels of conductivity and piezoelectric capacity.

Naturally functioning through its carefully designed and angled pyramid shape that causes an interaction with the Earth’s own electrical field as well as that of the human, clockwise and counter-clockwise movements of its internal shapes create 4 standing columnar waves (SCW), vortices that naturally restore balance to the Earth’s electromagnetic grid that is being disrupted by the increased use of electrical items and wifi in our age of technology.

These SCWs are then spread across its park like structure at a horizontal level via Solitron waves and connect to the whirling forms at its outermost reaches, so that the entire installation is ‘alive’.

In addition to this, a process of electrical phase conjugation imploding through carefully contrived shapes in spiral movements converging at a centre, creates neg-entropic life force energy that is exacerbated through the effect of an infinite fractal motion caused by the continual interaction of the different layers of compression of light, sound and form.

Thus returning a harmoniously conducive condition of extreme benefit for the bio-energetic structure of human and other living organisms, our Earth and the atmosphere, this device may cause biological life forms that come into contact with it to receive healing on multi-layers, as well as to re-ionise hundreds of miles of atmosphere around it.

Especially required in our homes and cities these days, where harmful waves of subtle energy pervade the space of our environment due to an excess of electrical items and Wifi being used, this huge device is designed to constantly clean up the electro-smog within a large radius of it that is currently so detrimental to the health of all biological creatures, without causing any damage to electrical circuits or machines.

Throughout the interactive sections that participants follow when traversing ‘The Magician’s Jewel’, they will be prompted to use focus of attention and encouraged to consciously move through varying states of existence according to TBOD. This may also cause implosive charge to spin to its centre thus converting harmful emotions into states of higher mental qualities, which will be measured with biofeedback technology attached to a headset.

A 3D model of ‘The Magician’s Jewel

After many months of working with a computer generated image of ‘The Magician’s Jewel’, describing it verbally to various people, then writing down the meaning in a summarised form from a longer written working draft, Susan then made a 3D model of it out of basic household materials, such as wood, cardboard, craft paints, aluminium sheet, paper and matchsticks, whereby:

Her main aim in building this 5ft tall model of ‘The Magician’s Jewel’ has been to: 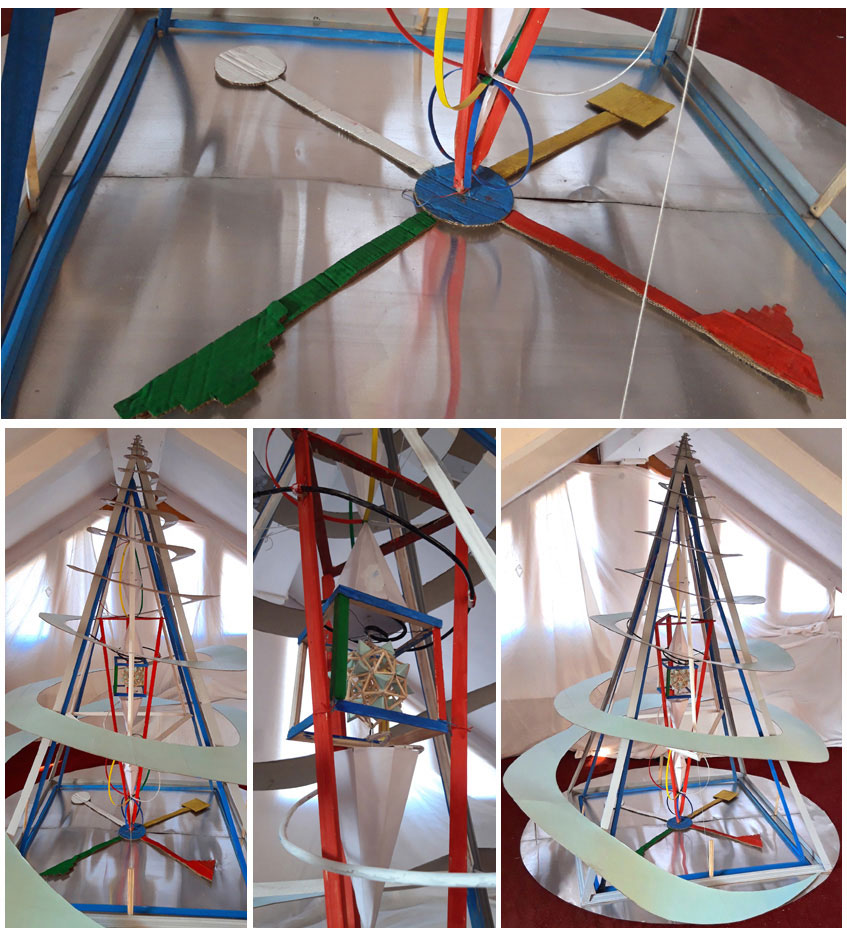