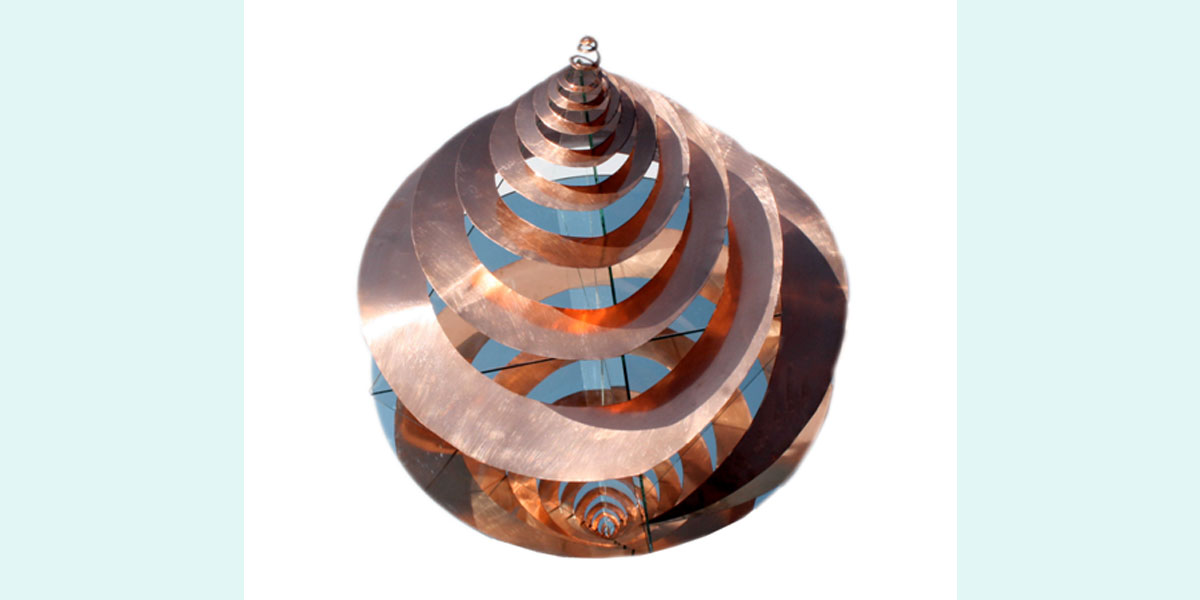 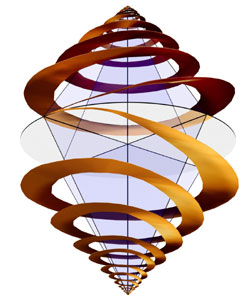 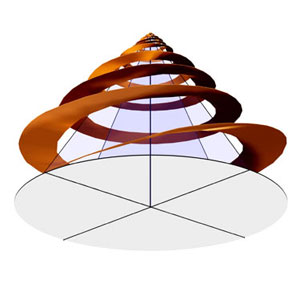 View of the actual installation art piece from below

Its very simple construction of a circular mirror, 2 glass equilateral triangles and a brass covered copperplate spiral has a very detailed meaning, which is explained fully in Susan’s book, ‘The Pyramid Spiral, Dance of the Five Elements’

Susan’s book, ‘The Pyramid Spiral, Dance of the Five Elements’

At the time Susan made the ‘Circle of Immortality’ installation art piece, she didn’t know that this would lead on to an experiment that would subsequently turn into a focussed endeavour to embed its various shapes and attributes into the layout and structure of her first Kaleidoscopic Film, also called by the same name, ‘The Circle of Immortality’.

Henceforth, she is ever widening her vision on skilfully embedding shapes and their vibratory meaning into artistic documentary films.

There are 2 aspects to the ‘Circle of Immortality’ installation art piece;

The solid part of the structure sitting above the mirror resembles consciousness occurring in all different states, whereas its reflection in the mirror below symbolises the physical manifest appearance mirrored exactly according to that conscious state.

Not only may our conscious state of mind that is perfectly reflected into the mirror-like screen of all appearance around us display itself in detail within appearance, but depending on its angle to the mirror, the frequency of conscious perspective simultaneously infuses into the collective creation of manifest appearance by all sentient beings, which then resonates situations, objects, people, subtleties etc… to appear within the environment of our space.

In the meantime, having developed other pieces of work, as well as met other thinkers and been influenced by their various devices, by 2019 Susan realised that the ‘Circle of Immortality’ installation art piece was not only a symbol describing the relationship between consciousness and appearance, but also a functioning device that may have an extraordinary effect on the various physical, energetic and subtle bodies of the human being if a simple, modification were made to its current composition.

While investigating how to draw the golden mean spirals into ‘Crystal of Time’, when she was making it in 2017-18, Susan came across the work of Dan Winter, who talks about the process of transference of Hertzian transverse waves into longitudinal compressional waves occurring when transverse waves spiral along 2 vortices of 60 degrees, whose apexes are connecting with each other at the centre.

In between them, longitudinal compressional waves emerge.

This idea is symbolised by the golden lines of ‘Crystal of Time’ photo collage art picture.

The inner workings of the longitudinal pulsation wave occurring between the 2 apexes is held inside the golden circle at the centre of ‘Crystal of Time’ and displayed, or rather magnified into detailed perspective in the photo collage art picture, ‘Diamond Lens, Doorway to Infinity’ . 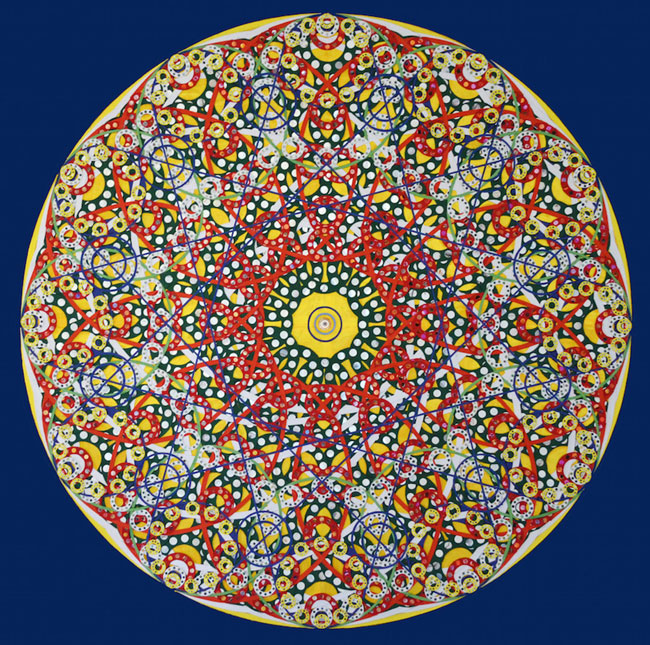 This process is exemplified by 2 x ‘Circle of Immortality’ installation art pieces joined at their apexes, whose slopes are already 60 degrees.

The mirrors should be placed onto a pentagonal shape at the base of each structure, because this is the shape that captures Hertzian waves into a vortex where they may implode into longitudical compressional waves.

Even though building a whole new physical ‘Circle of Immortality’ installation art piece and placing it upside down on top of the existing one is a viable option, Susan has decided to experiment with placing another circular mirror directly on top of the apex of the existing structure, facing downwards, so that the apex of the physical ‘Circle of Immortality’ installation art piece joins the reflection of itself in the mirror.

Determining the relationship between these two ‘Circle of Immortality’ installation art pieces, the subtle one appearing within the mirror, equal and opposite to the physical one appearing as a material object within the 3D space, is also integral to understanding the rapport between inter-dimensional spaces and how to open doorways between them.

The most important questions to arise here are:

If the inter-dimensional doorway is still firmly closed, the answer may feasibly be “Nothing!” and we may need to try again with 2 physical ‘Circle of Immortality’ installation art pieces.

It is therefore crucial to first of all attempt to convert transverse waves into longitudinal in one of the two above suggested methods and then see if that itself is passing interdimensionally.

In any case, whether the second ‘Circle of Immortality’ installation art piece required to cause this process of conversion from transverse to longitudinal wave forms is physical or an illusory image in the mirror, by virtue of the two mirrors placed at both ends of the structures, a closed circuit of energy is created, reflecting whatever is placed in front of it, to infinity.

Using the skilful reflective quality of several mirrors while it is only stationed in one position of Space and Time is potentially how a longitudinal wave may transfer itself everywhere, immediately, through all dimensional states, as a vibration instantly pulsing itself to infinity, causing everything within the mirrors to simultaneously experience that vibration.

The two mirrors placed at each end of the two ‘Circle of Immortality’ installation art pieces are like a mirror of the mind (physical) and of the heart (subtle) facing each other.

a/ showing you the illusion of perspective,

b/ describing an inter-dimensional portal through which you, having converted your ordinary transverse brain waves into a longitudinal compressional wave form, may reach infinity.

In this sense, a true merging of the three attributes of the ‘Conscious Installation Device’, takes place.