All Roads lead to… Maratika 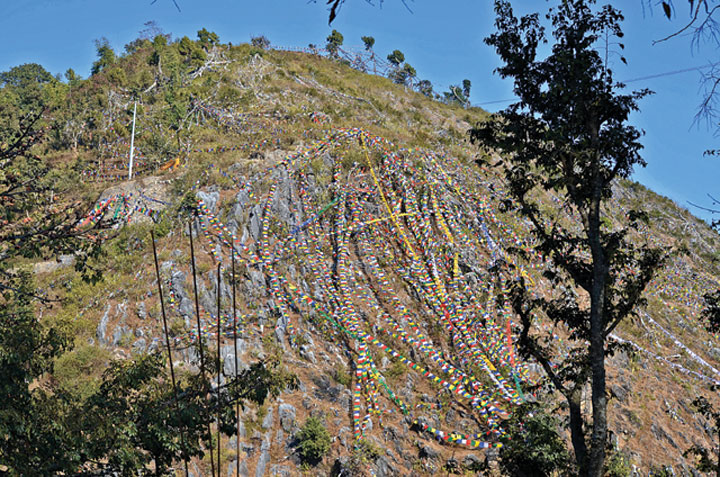 The road to Maratika goes well beyond the surface to an ultimate goal of immortality.

Change is inevitable! We have to flow with it, and even though at the time the experience may not have been perfect, we tend to fill our memories with its golden parts.

When I had last visited in 2007, it was a remote, far off the beaten track farming region, a hidden jewel of the Khotang district of East Nepal (near Okhaldunga), and the most common ways to get there were to either take a bus to the last stop and then walk, or hitch a ride in a helicopter if you could pay the charge of $1000 per hour, yourself.

My first trip there had actually been in 2004. Prompted by a lama at a monastery in the Jumbesi region of Solukhumbu, my curiosity was piqued when he told me about the splendid ‘Caves of Immortality’, a mere 2 days walk away from there.

I immediately set off to find the place with a porter for both protection and assistance. He was a local person, who skirted us around Maoist villages where young cadres stood lined up.

During my most recent trip to Maratika in December 2014, it came home to me that these ‘boys’ of 2004, are now young adults with wives and children, setting up life for themselves in the newly blossoming tourist industry of the area, quite a gloomy bunch, mostly intent on profiteering materially rather than following their predecessors’ joyful acceptance of life as it comes.

It is true to say that the majority of tourists there are pilgrims, but come they do, requiring transportation, food and a place to stay. As many jeeps as necessary now run from Kathmandu in the early morning, reaching Maratika by late afternoon, starting off optimistically on the newly completed Dhulikhel-Sindhuli Japanese funded highway that runs east out of Kathmandu. First class walls support classy asphalt hairpin roads that snake alongside the Sun Koshi River, climbing and falling along its natural terrain.

However, half way along, one has to leave this speed track and climb precariously up dirt roads for the rest of the way. In some years to come, these too will be marvellously paved, but for the time being, one has to cross fingers, pray for no rain – that will cause them to become slippery – and bear the bumps and pot holes and other travesties as they arise.

I have to admit though that walking there had been spectacular, causing the journey itself to be part of the pilgrimage. In January 2007 during the school holidays, I took my two children (aged 10 and 11) on the bus as far as Kodari, which lies a little bit north of the main Terai highway. Having already encountered a six hour ‘bandh’ on the way, when a hostile group were burning tyres on a bridge so our bus couldn’t pass – in those days you didn’t question these things, you just waited for the situation to pass – we continued to Jairam, which marked the start of our trek.

Staying in a bamboo hut next to the magnificently hanging suspension bridge that spans the Dudh Koshi there, we hardly slept due to the amount of noise from the pedestrians (and their animals) crossing it. I noticed that this time (2014), it had gone into virtual retirement in favour of a temporarily constructed car bridge to carry all the vehicles across into what used to be simple foot trails and jungle paths alone. At that time, we had climbed through forests of silver birch and played on the hanging roots of incredibly old banyan trees, while mule trains carrying goods to their numerous destinations, passed us by.

Stopping here and there for a cup of tea and a quick fix of Wai Wai noodles, we chatted to people along the way. Where there were no guesthouses, we made an arrangement with the locals – a bed and meal for 50 rupees each. We saw the landscape step-by-step and marvelled at the line of snow peaks in the distance. And then, at Maratika itself, we bedded down on mattresses on the floor of the monastery. No electricity, no hotels, no internet, basic food supplies, but a good quantity of warm local people.

Needless to say, I was shocked upon reaching Maratika in December 2014. It was as if a film set had suddenly been prepared overnight. Makeshift houses of tin or bamboo walls now line what had previously been a foot path, a town sprung up out of nowhere, the sounds of television blaring out everywhere, not to mention shops selling mobile phones, electrical gadgets and WiFi connection at certain points. Cheap garments pouring in from China have also reached as far as here and locals now seem to have largely discarded the traditional Nepali dress. However, water is an acute problem and a systematic scheme is in place to fill huge plastic containers from either taps that are turned on sporadically during the day according to a timetable, or from a natural water source near the lower cave.

However, even though Maratika’s superficial appearance has changed incredibly since 2004, its underlying purpose has remained evergreen throughout the centuries.

For Buddhists, this is where Guru Padmasambhava (also known as Guru Rinpoche) and his consort Princess Mandarava, attained immortal life (a state beyond birth and death) through their meditation and for this reason Maratika is considered a place to pray for long life.

For Hindus, the legend goes way back to Lord Shiva, who having given a boon to a demon to kill people instantly upon touching their heads, he thus turned on Shiva to kill him. Shiva took refuge in the Maratika cave and this place is now understood to be where real devotees may fulfil their every wish.

Maratika, also called ‘Halesi – Astonishing place’, has two main caves, located inside a central hill that for Buddhists, is connected with the Tibetan deity of compassion, ‘Avalokiteshvara’. Whereas the upper cave is known as the treasure cave and contains many self-created images, the lower one is vaster in size. It is said that having killed a demon, Guru Rinpoche flew through the roof, leaving a large hole through which the sky is visible.

There are two other important hills there where Buddhist pilgrims hang prayer flags, one associated with Manjushri (wisdom) and the other, with Vajrapani (power), thus making up the essential Buddhist triad of Compassion, Wisdom and Power. There are several other caves in the vicinity as well as a special bathing place that is said to draw its water from an underground lake deep below the Avalokiteshvara Mountain.

Maratika has now become accessible for so many people and locals are enjoying a chance of prosperity since this treasure of a place has awoken to magnetise the crowds.

Despite the changes, I would still definitely recommend it!