A Birth of Light, Lumbini Shines in the World

Located in the Terai of southern Nepal, the sparsely populated, forested, marshy land of Lumbini is famed as the birthplace of Gautama Buddha, whose teachings and instructions on the path to peace and lasting happiness still inspire millions today.

I first visited Lumbini in the early days of 2003. The occasion was the Sakya Monlam prayer festival that takes place there every year in the wintertime. It was still a quiet place then, pockets of development scattered here and there over a large area; varying designs of monasteries in a bundle to one end, a Japanese peace pagoda and adjoining guest house elsewhere, a small traditional local village to one side, and a couple of hotels and guest houses dotted here and there, with jungle and scrub in between. And, of course, the Lumbini Sacred Garden area. I would hire a bike and cycle between the places, as walking was long-winded. 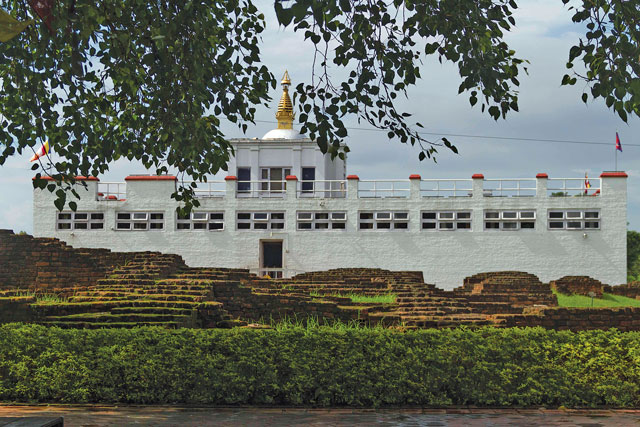 I subsequently visited for several consecutive years after that, and then sporadically between 2006 and 2014. I specify these dates in order to quantify the incredible amount of development that has taken place in between. So much so, that when I went back in December 2014, I couldn’t even find my way around the “town” of brick and cement that had grown out of what had been a one line strip of village with small mud homes, one shop, and basic dhaba, when I first visited in 2003. 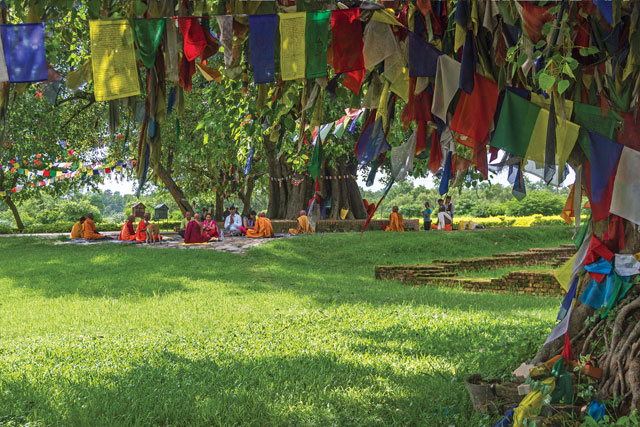 The local people also saw the tremendous possibilities for their backwater village with the influx of ‘foreigners’ that were starting to descend on Lumbini every year from the 1990s, and had opened up small restaurants, guest houses, and internet and photocopy facilities by the mid 2000s. By 2004, the huge lake that was to encircle the Lumbini Sacred Garden was actively being constructed, rendering the heart of this place a virtual island, with just several land crossings as bridges.

During the 1960s and 70s, Lumbini was a swampy, humid place, home to many tropical insects, and hot beyond imagination during the summer months. No one had been interested in building monasteries there due to its remote location and lack of infrastructure. 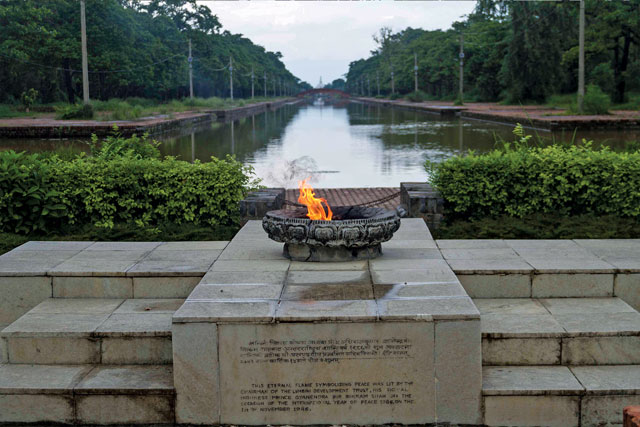 However, despite both financial and environmental obstacles, His Eminence Chogye Trichen Rinpoche, head of the Tsarpa sect of the Sakya tradition of Tibetan Buddhism, who had always had a strong wish to promote, develop, and honor the birthplace of Lord Buddha, built the first Tashi Rabten Ling temple right next to the Lumbini garden. Except for the Nepali temple already existing near the Sacred Garden, this monastery was the first of its kind to be erected in the area, and inspired both government and individuals to start constructing religious complexes in the area.

The pilgrimage of the late Mr. U. Thant, United Nations Secretary General in 1967, was a milestone. As a devout Buddhist, he sincerely believed that Lumbini should be a place where religious and secular leaders could work together to create a better world.

Discussions with the international community and the late king Mahendra of Nepal thus led to the creation of the Lumbini Development Trust in 1985, and nearly one million dollars were spent by the United Nations Development Programme to prepare a master plan that would include numerous engineering and archaeological surveys to ultimately restore more than 70 km2 of land. The plan consisted of mapping out three main zones, including the new Lumbini Village, Cultural Center/Monastic Zone, and Sacred Lumbini Garden.

The design of the main development area, whose shape looks surprisingly like a giant key, was undertaken by architect Kenzo Tange, who stated, “The overall intent is to reinforce the symbolic entity of the Lumbini Garden in its simplicity and clarity.” The entire development is connected to the Sacred Garden by a central route consisting of a walkway and a canal that extend the whole length of the area, with monasteries of different Buddhist traditions and countries flanking both sides, and auxiliary aspects, including buildings and places to house research activities, international consortiums, and teachings, to the opposite end. 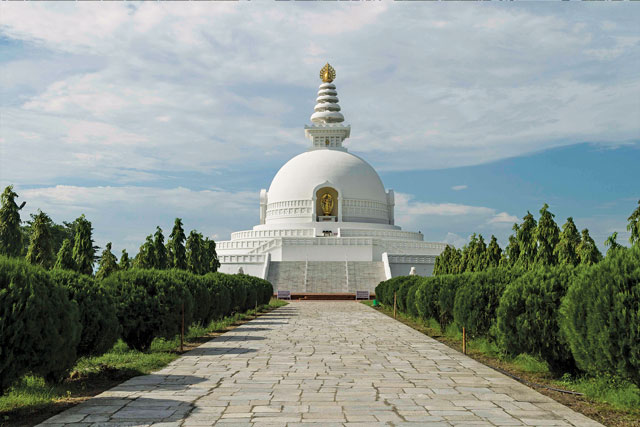 As the story goes, whilst on her way to her parent’s home in Devadaha in the month of May, 623 BC, Mayadevi, mother of Lord Buddha, gave birth to her holy son in the Lumbini garden. In this place, where on clear days a spectacular panorama of the Himalayan mountains may be seen to the north, the blessed baby is said to have pronounced the intentions of his birth whilst immediately walking seven steps in the four directions, under each of which a lotus flower is said to have bloomed.

In 249 BC, Mauryan Emperor Ashoka of India, a sincere Buddhist convert, visited Lumbini and constructed four stupas and a stone pillar with an inscription in Pali, testifying that this is indeed the birthplace of Lord Buddha. The stone pillar is one of the most important archaeological finds in the whole area.

The authenticity of the Mayadevi Temple and archaeological remains spanning from the 3rd century BC to 15th century AD, including viharas (monasteries) and Buddhist stupas, as well as numerous layers of brick structures, have been established through a series of excavations since the discovery of the Ashoka pillar in 1896. These treasures of history are also proof that Lumbini has been a center of Buddhist pilgrimage for millennia, and need to be preserved and monitored, as they contain evidence of how these places operated through the ages.

Since 1993, the Sakya Monlam prayer festival had been taking place yearly at His Eminence Chogye Trichen Rinpoche’s pioneer temple next to the Lumbini garden, and as it was increasing in size year by year, he decided to build a second temple in the area, one that would be both a place to hold the annual prayer festival, and a school for young monks.

I first came to Lumbini at the time of the inauguration of this second temple—also called Tashi Rabten Ling—located just outside the gates of the Lumbini Development Zone. At that time, it was surrounded by agricultural fields, and was a good walking distance from the Lumbini Village that has now crept within earshot of this once remote temple. Whereas there had been little or no connection to the internet, and mobile phone signal was weak, in those early days, every hotel, café, and restaurant in town now has access to Wifi.  And, there’s a new bus park to accommodate the load of vehicles bringing in the mass of tourists.

Indeed, as of now, half a million visitors already make the pilgrimage to Lumbini every year, and a three billion dollar investment project headed by Asia Pacific Exchange and Cooperation Foundation (APECF), a quasi Chinese governmental body, is already transforming it into a first class pilgrimage destination for Buddhists, spiritual seekers of all traditions, and tourists, in general. International contractors are being called to facilitate the construction of an airport, highway, hotels, convention center, temples, and a Buddhist university, wherein job creation, poverty alleviation, and environmental protection are major considerations. In addition, the installation of water, electricity, and communication lines that Lumbini currently lacks will also be majorly improved.

Millions of visitors are thus expected to visit each year when the project is complete, so that Lumbini, once a small, discreet, and very traditional place, will be firmly established on the international map!