The Pyramid Spiral, Dance of the Five Elements : Review

In this mind blowing book, a step-by-step process of how the manifest world comes into being is suggested through the description of a piece of artwork made by the author herself, Susan Griffith-Jones. 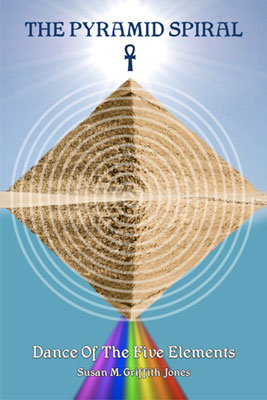 At the time of making it, she was living next to the beautiful stupa of Bouddhanath in the eastern part of Kathmandu, and agrees that she was heavily inspired by its shape, size, and proportions. “Over the six years that I could see the stupa from my window, it seemed to impress its essential meaning upon me, and I ended up making this piece of artwork, ‘The Circle of Immortality’, which is a bit like a stupa,” remarks the author.

On first sight, one observes a couple of equilateral triangles made of glass positioned at right angles to each other, so that they form an open pyramid, with a sheet of copper-plated brass cut out as a spiral weaving its way upon the triangles to their apex, where the last curves disappear into infinity. But that’s not all! Its real mystique occurs as the entire structure is placed upon a circular mirror, so that you can see the spirals seemingly twisting into the vast space of the mirror, the glass triangles rendered almost invisible by the nature of reflection.

And, it doesn’t end there, because the four shapes and space within the mirror have a powerful meaning, as the five elements depicted according to the highest tantric practices of Tibetan Buddhism that the author was studying at the time with the masters of the tradition, who were also residing in Bouddhanath. Square based earth (the outlined base of the pyramid), circular shaped water (the base of the whole piece, which is also a mirror), triangular shaped fire (two equilateral triangles sitting at right angles to each other), spiral shaped wind (sitting upon the triangles), and the space around and within the mirror.

It is a simple piece of work, yet with a powerful message, demonstrating how it may be that the whole of existence comes into appearance—holding a meaning beyond the general image you see before you, just like the stupa of Bouddhanath.

If you have not studied any philosophical schools of thought or any Eastern mysticism, then some of these ideas in the book may seem radical, but the author gently carries us through the meaning step by step, naming the purpose of each element, and how they each dance together, both one by one, and collectively.

The spiral that is placed upon the mirror represents the state of our consciousness, and its reflection within the mirror is like the manifest world around us being mirrored into existence within our consciousness, depending on how we perceive things. Therefore, as we stand at different viewpoints, so does reality appear accordingly. These two aspects are impossible to divide, because they are a direct result of each other, which complements the fact that a mirror EXACTLY reflects whatever is placed before it, even though there is nothing actually present within it.

How this occurs, why it occurs, and the meaning behind it all is explained page by page in this marvelous book. Here, we are forced to ponder upon these ideas again and again, as we read the words and take in this understanding, then look around us at the world, and understand how we project our thoughts into reality—an extremely powerful meditation!

And, Susan’s creativity does not stop here, because the 52 verses that make up the core text of the book is also the word-for-word narration to a 45-minute movie that she made about three sacred locations in Nepal, entitled ‘The Circle of Immortality’.