The Ancient Cemetery of Bouddhanath, a Place for All

Bouddhanath Stupa is where one goes to find a deeper meaning of one’s existence; it is where one finds oneself.

Everyone who arrives at the stupa of Bouddhanath gets a hearty greeting! No matter which direction you come from, its poignant eyes painted on all fours sides of the square base of its topmost part seem to speak to you directly, encouraging you in, and then following you around, calling you to awaken something within. 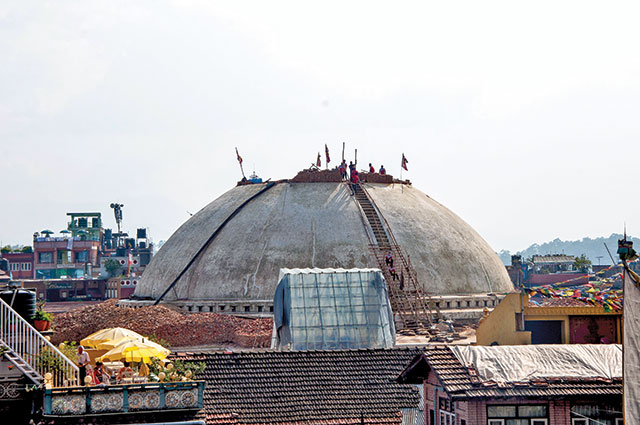 Well, that was so until April 25, 2015, when this greatest of monuments was partially damaged in the massive earthquake that hit the Kathmandu valley that day, enough so to require a complete reconstruction of its upper tier where its famous eyes belong.

There is a legend that says that if the stupa of Bouddhanath collapses, so will Nepal. Needless to say, work on recreating the famous head of the monument and other damage to it began as soon as feasibly possible, starting with the removal of rubble and the insertion of a spine, the ‘Tsog shing’, into the centre of its dome belly, as have all stupas. This was conducted at a ceremony where high lamas of the Tibetan Buddhist order and other dignitaries took precedence, and rebuilding continues to this day. 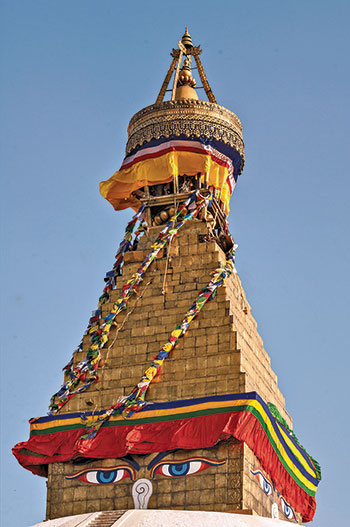 Despite the interruption, as you enter the ‘kora’, the circular path of circumambulation around the base of the stupa, you will still find a jovial place with a lot of activities going on. You can browse the shops selling high-end curios and religious paraphernalia and antiques from Tibet and Nepal; discover the meaning of the mandalas and deities in numerous thangka paintings displayed in windows; and sit in any number of restaurants on the roof tops overlooking the stupa, sip a coffee, eat local food or a pizza, and enjoy the view. Or, you can simply sit on one of the numerous benches around the kora, and just take in the whole thing; pigeons, dogs, and all! Bouddha restaurants, like elsewhere these days, are adjusting to the cooking fuel crisis, and have made shorter menus with items that can still be served despite the shortage.

All of this, however, is the superficial aspect to life at the stupa, and as I peeled layer by layer off the place in my six consecutive years of living there, I discovered that it is really what the tantric masters call a ‘cemetery’. Not like a cemetery where people are buried, but a place where all types of people exist together in one energetic cauldron, like a complete cross section of society manifest in one small place, so much so, that the potential is there to come to understand one’s essence of being at an intensely increased rate.

One high lama, whose monastery overlooks the stupa, once mentioned to me that all wishes made at the stupa would definitely be fulfilled. This naturally raises the question, ‘How?’, a contemplation in itself that can take you to the root of your being. First and foremost, Bouddhanath is a place of spiritual contemplation, and the outer sheaths, simply the mechanism to process it.

As many of the buildings around the kora were starting to crumble during the first decade of the 21st century, a massive renovation project began, whereby the entire area was completely restructured, and luckily so, as it meant that minimal damage was done to these reinforced buildings during the quake and following aftershocks and tremors. In doing this, this precious arena has become so splendid that many visitors come to see its revealed beauty. On the downside, it has become largely overpriced, but is so awe-inspiring that you end up not minding paying a bit more!

I saw much of this work going on during my time there. Every nook and cranny, side street, and back way seemed to one-by-one transform their old shabby tea rooms and dingy work places to newly decorated shops and modern cafes. Just to put things into perspective, when I arrived in Bouddhanath in 2001, it had been impossible to find even a ‘decent’ coffee there, and we used to hire a taxi across town to Thamel—the tourist area of Kathmandu—just to enjoy some different styles of food once in a while.

Although local Tamangs (in particular) have been living there for centuries, it became home to the Tibetan community after the Chinese invasion of Tibet in 1959, as it is considered one of the most holy places outside of their own country. Bouddhanath has an intricate relationship with Tibet, not only due to it being a special Buddhist icon, but because the story of its construction is intimately related to how Buddhism was expounded in the ‘Land of Snows’.

Millennia ago, a local lady who reared chickens wished to build a stupa and asked the then king of the area for permission. He agreed, and she constructed it. She had four sons, who made a wish (at the then Bouddhanth Stupa) that they would be reborn in different guises and in suitable locations in order to spread the teachings of the Buddha to the north (Tibet), in a later age. It is said that during the 8th century A.D., these four actually became, respectively, the king of Tibet, his minister, an abbot, and a powerful tantric yogi, whose talents combined to make it possible for the teachings to flourish there.

At the top end of the local social spectrum are the high lamas who teach and bless countless beings through their presence. Many have monasteries within reach of the stupa, where their monks or nuns learn the ritual and scholastic aspects of Buddhism, and visitors from around the world come to simply walk in their gardens or attend the pujas, and some even seek guidance from the lamas and attend teaching sessions. Although the shrine halls of a few monasteries are dotted around the kora, many are located within walking distance of the stupa.

The early morning (around 5 a.m.) and evening kora (4 p.m. onwards) is a must, and it is where one really gets the flavor of the place more than at any other time. Kora literally means ‘circle’, and relates to the way people walk round and round the base of the stupa, reciting mantras on their malas (prayer beads), prostrating their bodies full length on the ground, or simply chatting with friends. Kora is an action compliant with the revolution of the earth around the sun, and our solar system within our galaxy. In the side streets, there are the remnants of one or two of the old style little teashops, where at these hours, you can still get a much appreciated traditional chai or Tibetan tea with some ‘paleb’, a soft and slightly raised flat bread accompanied by some lightly spiced potato dish.

Many say that the stupa is ultimately indestructible. Indeed, it has withstood many an earthquake in the valley throughout the millennia, but when I visited the Dharmarajika Stupa in Swat Valley of Taxila in North West Pakistan, and sat on the top of these ruins, I imagined how it would have been in its hey day. I could switch my mind to Bouddhanath and see the remnants of a time when a Vajrayana stupa had stood there, with a market and flourishing settlement around it. And I could also see that it now lay in complete ruins; the valley that had contained a city, now deserted.

Just like the kora of Bouddhanath, Time is a circle, and one extreme follows into another. Change is inevitable, and nature teaches us that in its myriad ways, no less at the stupa of Bouddhanath.

Will Nepal be revived along with the stupa? This is what legend would have us believe.