Healing At The Source 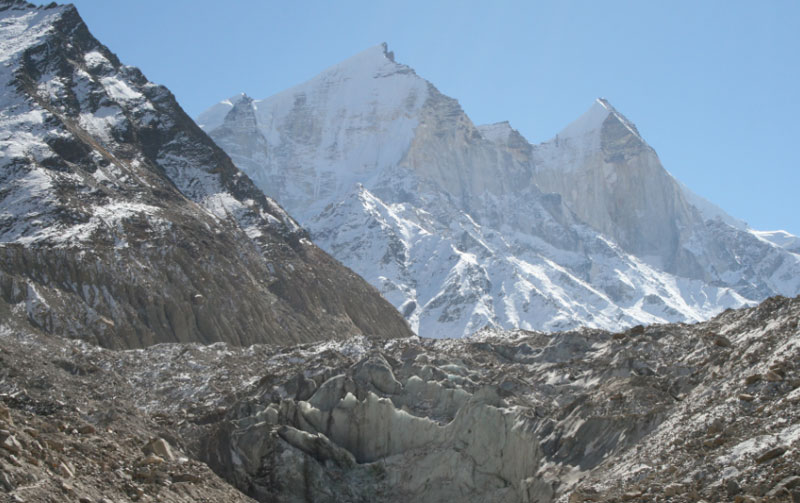 Gazing up at the sheer ice wall at the end of the glacier, I wonder why solid water, seemingly so compact, melts into liquid at this particular point of its course.

I think of the logical reasons; why any block of ice melts at any particular given moment – because it heats up, because its molecules are not so tightly bound together, because it has loosened; ‘Loosened its grip on what?’ I ponder, myself giddy with a kind of altitude sickness at 4000m.

With my four score plus twenty of life bagged by virtue of reaching this great source of the River Ganges at Gaumukh, I wonder how the saying of one’s assurance of a hundred years of life upon coming here and drinking its waters, came into being.

I, with my meagre thirty-seven years do not feel well equipped to answer such questions about reaching one hundred, but nevertheless my mind seeks interpretation of the enigma. For that would mean keeping the motor of the physical body going for its full natural course of time without succumbing to disease.

Written in the annals of many Eastern philosophies are well-defined methods for approaching bodily diseases through holistic means of body-mind union. For reaching the energetic source flow of vibrational waves that create our manifest being, one finds the causes of pain and pleasure.

I think of my own body-mind union as my eyes are uncomfortably affected by the glare of the low-in-the-sky, early morning sun reflecting off this great shimmering surface of ice.

Different colours appear within the icy face opposing my gaze and I realise that I feel sick and have a headache. Trying to muster some positive courage just to go on with my mission to this source, I turn on the video camera. It’s the first time that I’ve ever used this beast of a machine, being much larger and more complicated than any other I’ve ever used before in my life. ‘Just one chance of being here,’ I think, as I try to will myself to be ill later.

I turn my focus to the camera, click ‘On’ mode and hold it up to my shoulder to try and get a more steady position as I’d left the tripod back at the last habitable place on this route, Gangotri, which is a nearly 20km walk away, so as to minimize the weight of cartage. I shift my gaze across the glassy edge of this alive mass of ice.

Pointing the camera up the wall, I watch the sparkling drops of water melt away from their state of solidity, whilst huge blocks of ice rest like rocks at the foot of the wall, slightly blue in colour – well, seemingly blue in the LCD view finder. I adjust the light reading, creating a filter so that the glare does not reflect overpoweringly.

After a good ten-minute perusal of different aspects of the glacier face, I put down the camera and switch it off. A dizzy feeling immediately ensues and my temporary revival relapses into a state of feeling deeply unwell once again.

Determined not to be beaten by such at this moment, I unwillingly switch on the camera again, knowing that a concentrated focus upon another activity would at least keep hold on my mind space for that time period and distract me from dwelling on my personal sufferings.

This camera exercise ensues until an hour of work has been completed and an hour of respite from the nausea, attained. But it is not to last long as stumbling away from the source along the 2km path that only permits foot passage to where our horses await, I have to simply focus on each next step just to get there. Fumbling my way onto the horse, I lie down upon its wiry mane, close my eyes and allow the horse guy to lead me along the path back towards Gangotri.

The next day, after a dose of Paracetomol the previous evening at the lower altitude of the last habitable town on the river, I feel much better and reflect on the journey to the source.

The semi-hallucinatory effect produced by the nausea and altitude sickness had created a sense of ‘Whatever comes, whatever goes’ within me and I had loosened my grip on life.

That sense of letting go had dropped a lot of ordinary thoughts rumbling around. For had I had the chance to sit up on the horse and enjoy the wonderful scenes around me, I would have spent so many hours continuously describing what was happening around me, to myself… like bubbles on the surface.

For do we not travel to such places in order to discover scenes of tranquillity, peace and natural beauty, to fill one with euphoric feelings and that feel-good factor that often our everyday lives tend to draw a cover over. Yet, are not those ‘marvellous moments’ simply those same old surface thoughts just appearing in another guise?

Later, during my ordinary conceptual mode of thinking about everything that is happening around me, planning the future and remembering the past – these three moments of time all jumbled within a mass of different strings of thought all seemingly occurring one upon the other – I think of the relation between this type of non-conceptual mind that does not wander here and there in its focus, but rests upon a point in the present.

Like a portal, a door of time, that one-pointed focus leads the mind into another space of being, where it dissolves into itself and just remains there, somewhere in the hanging, yet not hanging upon anything.

We cannot define those moments. They just are.

I marvel at the conundrums that this state beholds. For the conceptual mind, it is unthinkable; it is its death, as it cannot play around in that arena of mind space where relative outer appearances of body and mind do not affect one’s actual being in the same way.

Reaching an outer source of such magnitude as that of the Holy River Ganges’ epitomises such an ideal. An ideal, because it seems attainable and is attainable, yet is difficult to retain as waves of uncontrolled thoughts ordinarily bash at the shores of our everyday existence.

For stealing that precious space at each moment of life so do our thoughts erode our being until we crumble under the weight of their power, allowing them to melt into one another.

By letting go of their tight grip on our movements, allowing the mind to rest at its source from where they flow, yet not distracting their flow, not repressing them by damming them up behind huge concepts and habitual modes of dogged thinking, but just letting them flow on and on until they reach the ocean, once again they may become one with that ocean. Like this, no drop that flows from the source may ever actually be separate from it.

So does the cycle repeat itself as thought perspires into the atmosphere of mind and is once again held by its spacious source.

Perhaps with such understanding, life may really attain its full course without drying up on the way.

Thank you Gaumukh for your healing and assurance of life ! 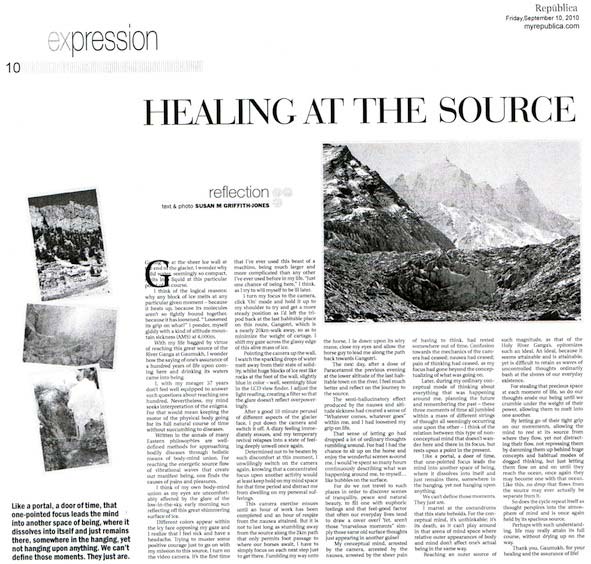