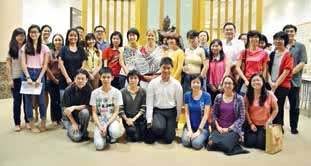 Singapore – On 16 October 2013, a thought-provoking sharing session on the eight worldly dharmas was conducted at KMSPKS by British Buddhist, Susan M. Griffith-Jones, who has resettled in Nepal. She flew in to Singapore to conduct this session for youth, highlighting to them how the four pairs of worldly dharma: gain/loss, praise/censure, fame/disgrace and pleasure/pain are driven by the five negative emotions of mind – jealousy, desire, anger, pride and ignorance – as their captain. Through cultivating awareness of one’s own mind-state, these five could be transformed into positive aspects of wisdom. The session ended with interesting and creative skits on the eight worldly dharmas put up by the 35 participants.