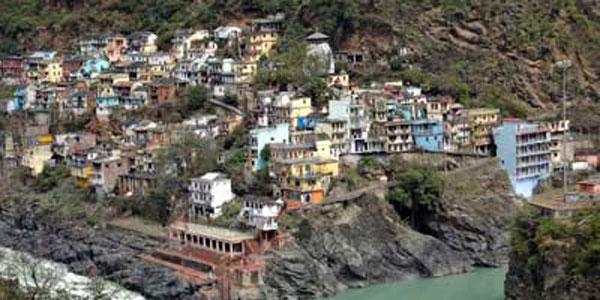 With different names at different places for different people, the flow of the Ganga from the Himalaya to the Bay of Bengal is poetically symbolic of human life.

When Brahma instructed Ganga to descend to Earth in order to help the ancestors of King Sagar reach heaven, she compassionately refused. She argued that if she were to fall to Earth from the sky, then Earth would be flooded and all beings upon it would be drowned. At this, Shiva intercepted insisting that this would not happen if he were to catch her upon his head whereby she could flow safely through his hair tresses to the ground. 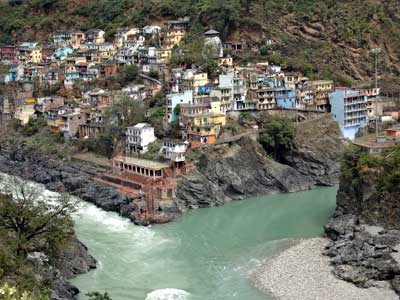 It is easy to understand why such stories avail when you look at a satellite image of the earthly terrain upon which she does actually flow in her mountainous regions. For streams stretching out like locks of hair may be seen in her upper reaches as she emerges from her various Himalayan sources to join her main path that carries her vast body of water across North India to the Bay of Bengal.

Her first, foremost and most prominent stream that corresponds to the well-known tale mentioned above rises at Gaumukh in Uttarakhand, India from where she flows through the first settlement of Gangotri on her route. Here she is called ‘Baghirathi’. But simultaneously from the same glacial deposits just to the east, she arises from another source at Kedarnath, as ‘Mandakini’ and also even further east from another at Badrinath, as ‘Alaknanda’.Her Kedarnath and Badrinath streams then unite at Rudraprayag and flow on jointly as Alaknanda and join her Baghirathi stream from Gaumukh at Devprayag. Here, she officially becomes ‘Ganga’. Albeit probably the most famous confluence point on her upper path, this is the fusion of just one of her mountain births. For all along her flow she is joined by multitudes of streams and large rivers that have flowed from the high mountains all across the Himalayas and North-western India, to connect with her main body. 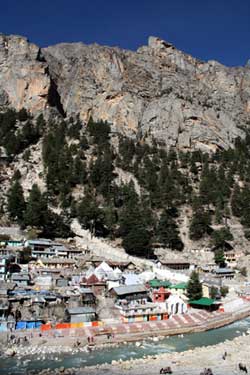 The river Yamuna rises from the Yamnotri glacier and flows parallel to Ganga meeting her at Allahabad. And if we take a glance across the Himalayan range in Nepal, we could name a great many sources arising and joining to the Ghaghara, Gandak or Kosi and follow the trail of how these large rivers eventually end up in Ganga’s flow.

Sources as far wide away as the peninsular uplands of western India are carried forth by rivers such as the Chambal, Betwa and Son. Arising from semi arid areas, they have less water, but nevertheless eventually join Ganga. It is said that her entire basin is accountable to approximately half a billion people, which in itself makes her an incredibly valuable entity to the welfare of India as a nation.

A ‘prayag’ is a Sanskrit word used to denote where two rivers meet and become one. This is a very important and symbolic place for spiritual practise,representing a place of coming together of parts that are separated, a place of union. ‘Two becoming one’ is an all-embrasive and highly important symbol on any spiritual path as we humans are ever searching a way to connect our constantly divided dualistic mind that works in opposites, into its complete and whole aspect of pure divine love.

On route to Rishikesh from Gangotri, I was drawn to Devprayag, which is undoubtebly one of Ganga’s more famous prayags. Here Baghirathi’s turbulent and Alakananda’s peaceful flow meet. All the major upper streams of her youthful form from her furthest reaching points in Uttarakhand have come together at this small town situated on the corner of their intersection. Babas sit by the banks of the river in small cave like shelters carved into the rocks and people from far and wide come to bathe and feed the huge mountain river fish that swim near to the shore at the confluence point. 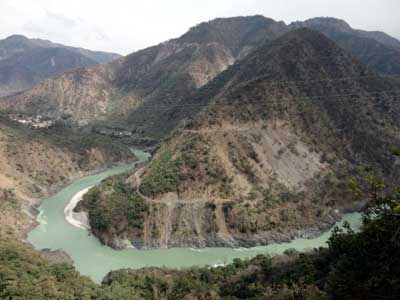 It is from this place that she is to flow through and out of the Shivaliks, which are the outer most part, or rather the foothills of the Himalayas, into the plains of North India. Here her path twists and turns around major bends that cruise through low mountains of up to 1100 metres high. The road largely follows the river and lovely beaches line this route to Rishikesh.

I happen to stop at a wayside place on this road, where I request permission to camp for the night next to the river.

I pitch my tent on a small sandy area next to some fast flowing rapids. The river is quite wide here and loud as her water flows across large boulders fixed for centuries in the way of her flow. As night falls, it grows cool and the watchman from the house comes across to my camp to tell me to light a fire to safeguard against straying bears and wolves. I think that this advice may be a little exaggerated, but I comply, if not just so as to enjoy a nice fire. Wood is plentiful from around and about and the large logs make a great light.

The next morning, I awake to the sound of shouting from the river and I can see rafts tackling the rapids in line, containing school kids screaming out of the sheer fun of it. I wave back and tiptoe into an eddy of freezing cold and reasonably still water near the edge of the river that does not flow with the strong current of the central part. People have been known to disappear in such rapids and the school kids are all well equipped with life saving vests. I don’t swim too far away from the edge.

The watchman appears later on in the morning and invites me to come to the local temple where he tells me the story of a self-appearing Shiva lingam here. Many years ago, a cow that belonged to a village across the river used to swim over each day, laden with milk in her udder. However, when she returned to the village at nightfall, she would have no milk left in her. This went on for years and years. One day, the village people decided to investigate the reason why this occurred and found out that once she had crossed the river, she would deposit the milk on a Shiva lingam and thus nourishing it, it would grow. Eventually they built a temple around it and today, the lingam is still in tact and tended to by a pandit.

Rivers easily cross national borders and even though their names may change as they do so, they intrinsically start as tiny streams, or glacial melting points high up in the mountains. By growing and adding flow from multitudes of little sources pouring into them as waterfalls and streams, they swell and become mighty rivers, world famous. Yet each of their stages are as intricately important as all others, as they exist within the delicate balance of being both the individual sections, piece by piece, as well as the whole river from top to bottom, at the same time.

For just as the source drips from all her mountain sources, so does the mighty Ganga meet the ocean at the Bay of Bengal, as a simultaneous occurrence of events happening in the same instance of time. And so we too as humans build up from a tiny drop at conception, to a baby at birth that becomes fast and furious in the mountain streams of youth. Swelling more gently in middle age, we thus progress towards our final goal to dissolve into our ocean of being at death.