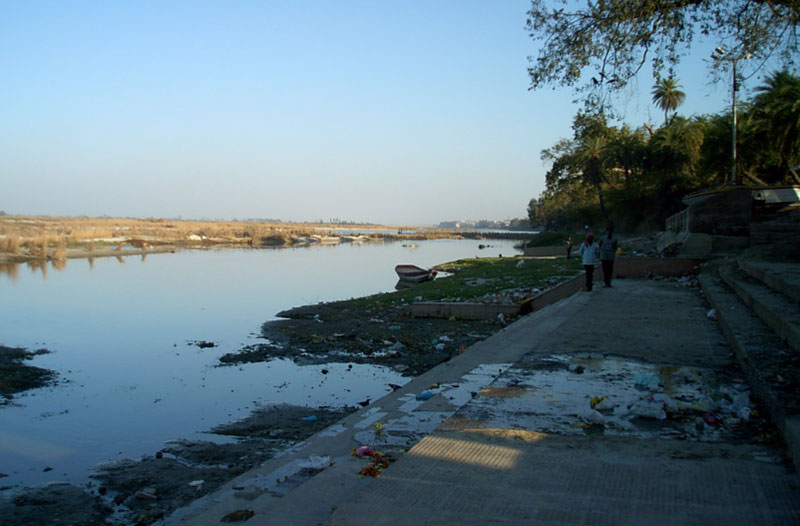 As middle-aged Ganga reaches the city of Kanpur, she is sluggish and set in her ways, her prior youthful habits taking their toll as she is now physically polluted with life’s course. Her free-flowing independence has been compromised since Haridwar where the majority of her water is diverted into the huge canal system built by the British to irrigate the fields of northwest India and before that at the huge Tehri dam, where her mountain charge is converted into hydro-electric power. She is bound to man’s constant need for her and as an unrelenting and life-giving goddess to millions, plays an undoubtedly useful role in society. However, the cost of her selflessness is such that one wonders if she will actually make it on to old age at this rate.

Already arriving full of pesticides and chemicals from the 400km stretch of outflow from agricultural fields after the remaining waters in her natural course dribble on from Haridwar, at Kanpur she has to cope with the massive amounts of industrial waste coming from industries such as leather, jewellery and small arms for which the city remains an important centre. Industrial by-products pouring into her stream remain a constant torture to her already over-burdened status, not to mention the continual day-to-day deposits of the city’s raw sewage into her channel.

I go along to the south of the city to meet Rakesh Jaiswal of Eco Friends, an NGO for environmental education, protection and security based in Kanpur. He highlights that now that the majority of water has been diverted at a relatively newly built barrage that crosses the river around 5km upstream, the quantity has increased, but the amount being taken out of the river there for domestic use is completely parching the river herself of flow. It is already too low and they still need to increase the amount of water they take out to feed the needs of the city. Diverting water also has its own dangers as the river may decide to flow along an old course, flooding whatever stands in her path.

However, this diversion has made a world of difference to the face of Kanpur, definitely improving the overall quantity of water. Before it was built, the river had been reduced to a trickle of sludge passing the ghats of past glory while the majority of her flow had passed through a nullah on the other side of a mud bank island that has now become the opposite bank of the main river course.

He tells me that the Ganga Action Plan (GAP) that was initiated by Rajiv Gandi during the mid-1980s called for sewage treatment plants, low cost sanitation, electronic crematoria and river front development projects to get underway. Especially concerned with the high levels of sewage returning untreated to the river along with industrial waste flowing directly into the feeder streams aligned with the river from the factories, in subsequent years GAP Phase 1 saw that three water treatment plants were set up in Kanpur, two of which are using sedimentation after aerobic treatment and anaerobic stabilization that treats wastewater that will return to the city’s taps once again.

Since then, the population and industrial output increase has outdone the amount of raw sewage that the treatment plants were able to cope with at that time and have rendered them insufficient. GAP Phase 2 proposed more treatment plants that are still yet to be completed.

At Kanpur’s Jal Nigam water treatment plant that opened in 1989, I watch as curiously coloured water clogged with scum and other materials enters the machine and comes out with the majority of the filth removed, a brown stained water continuing to the next level of purification method nearby. The smell is beyond description. Along with the domestic wastewater treatment plants, this is one that also deals with the effluent from the factories.

If the toxic hexavalent chromium reaches the water treatment plants, then it renders the anaerobic treatment process useless and no biochemical breaking down of organic waste can take place. Just to make things even worse, it may not be removed from the so-called “treated water” that goes back into the city’s drinking water supply.

Actually, all tanneries are bound under GAP to remove the chemical—chromium that becomes highly toxic during the process of tanning hides for the leather industry. This has to be recovered inside their factories before the wastewater leaves for treatment at the plants, the smaller factories clubbing together to use common recovery plants.

But, the process of pumping the city’s sewage and wastewater from industries to the treatment plants requires much electricity that is one thing that UP state does not have in abundance, generators filling in the gaps when the diesel is available! So, the question remains as to how much wastewater actually reaches the treatment plants…?

I go downstream from the tanneries to the farming village of Shaikpur, where an open irrigation channel flowing into the village is covered in scum. This is because in some cases only primary treatment of toxic waste actually takes place and it means that irrigation water flowing into the fields that supply the city with vegetables and milk from grazing buffalo is still highly toxic!

The locals are not ignorant about their water supply being contaminated and vociferously make accusations against the tannery owners, who are predominantly a minority group of Muslims. Taking the argument further in this way, what is essentially a question of local government organization of clean water supply to the village unnecessarily becomes a racial, social, religious and cultural issue of a much wider scope. Villagers show me skin rashes and diseases on their bodies and say it’s due to the water.

On the way back to Kanpur, I pass through the industrial town of Jajmao and stop at Dapkah Ghat. Here there’s just a small trickle of stagnant water carrying garbage. Behind, chimneys blow smoke out into the atmosphere and there’s the smell of toxicity everywhere. Raw hides are being unloaded from a truck at a factory gate, and ready ones are being carted in piles on bicycles with carts behind to their next stage of processing.

The next morning I go along to Bhairon Ghat where many of the city’s dead will end up on their cremation pyres. There, corpse after corpse arrives, some covered in ornate cloths, others decked out in flowers. First they are carried down to the river for a customary wash and are then brought to an undercover area where wood bought by the quintal from above the ghat is laid out as a pyre. The corpse is then placed on top and a pyramid of wood covers it, so that the head and feet stick out. There are only men there, but the atmosphere is busy with activity and not at all solemn. Taking about three hours to burn, there is not much for the family to do, but to wait as onlookers and tend to the fire as needed.

A fairly new law in the city has now banned the remains of the pyre to be swept into the river. The electric crematorium, one of Rajiv Gandhi’s ideas for action under GAP, has absolutely not taken on here and lies mostly locked and unused.

After the bustle of the morning, I am relieved to arrive at Sarsalaya Ghat, a rather peaceful and gentle place with not many people hanging around. A boatman offers me a trip to the mud bank on the other side where farmers plant various crops on tenanted land owned by the government. Rich in silted agricultural land, it is tended to by labourers.

I hesitantly ask Rakesh whether Ganga will survive or not, and in a resigned tone he answers me, “I have lost all hope.”

(The writer is an intrepid traveller, an internationally acclaimed photographer, a mother of two teenagers and a practising Vajrayogini.)