The Mysterious Power of Ganga 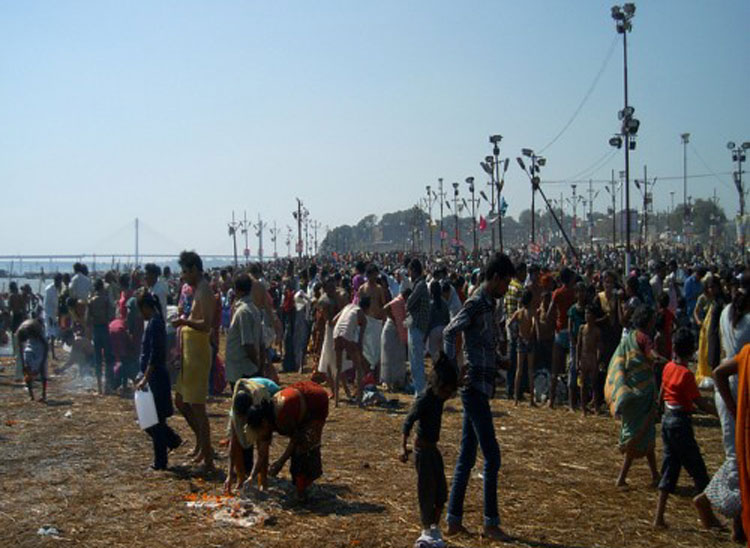 The question of what generally happens to an already limpid Ganga after Kanpur haunts me. She’ll have to roll on past pesticide infested fields flanking her either side and through the industrial waste of Fatehpur, until she reaches the city of Allahabad located quite a fair distance on downstream. Here another influence will reinforce her strength as she is energised by the mighty flow of Yamuna physically joining her there.

Perched on the banks of the confluence point of these two mighty rivers at Allahabad, the remains of Akbar’s fort overlook what is one of the most famous points on the entire river, the Sangam (Sanskrit for confluence), the infamous ‘triveni’ (joining of three rivers), that is also the most sacred place of bathing for millions of Hindus.

This is ‘Prayaga’ of the Hindu puranas, where the Kumbh Melas are held and where the mythical Saraswati river is the invisible third one to make up the ‘triveni’. Some say she previously flowed into the other two, but has now dried up, whilst others say that reference to her is not as a river, but as a representation of the Milky Way. She is also spoken of as the saints themselves that come from all over to dip in the river at the Kumbh. Despite all theories, in every sense she remains a mystery.

The region of Allahabad was controlled by a succession of empires; Mauryan, Gupta and Kushan, to name but a few ancient ones. Later it rose to prominence under the Moghuls and Akbar renamed it ‘Illahabad’ (Persian for ‘Place of God’). In 1801, the current Nawabh ceded rule to the British East India Company, who moulded the name into ‘Allahabad’ and turning tables, it later became one of the key centres for the revolution against British rule in India.

Melas are held in 4 different places in India, each playing host to a ‘Kumbh’ every 12 years, Allahabad being one of them. 2013 is a special year as it is the time of a Maha Kumbh that comes around once every 144 years and I am heading from Kanpur to this festival now taking place there !

People come from all over India and abroad to the Kumbh as it is regarded as the most holy time to bathe. As far as the Hindu legends go, having come from the pot (kumbh) of Brahma, Ganga’s water flows out through the toe of Vishnu in the heavens and subsequently through the locks of Shiva on Earth. In the Hindu tradition, these 3 deities represent 3 aspects of existence – creation, preservation and destruction, a continual dance of manifestation taking place within an infinite timeframe.

For the 30 million people present on the main bathing day of the Maha Kumbh in Allahabad on 10th Feb 2013, the river looks misleadingly full as they are letting more water through the Kanpur barrage further upstream, to make sure there’s a respectable amount of flow on display here.

A total of 120 million people will visit during the entire festival and perform ancient old traditions such as offering flowers, milk, cloth and other puja ritual items to Ganga, which basically means throwing them into her water. In the olden days when her body was full and fast flowing and the majority not siphoned off for irrigation and domestic water purposes, then such practises were feasible, but these days it seems that she cannot physically cope with the dumping of either organic or inorganic matter into her as her ability to flow away such items is greatly diminished.

A lot of people have wondered why there have never been any major pan epidemics when so many come to bathe in concentrated areas of the river at one time and further to this, scientific surveys have tried to find out what is the magical property that keeps Ganga water fresh after being stored for a long time in bottles and caskets. Scientists have explored the possibility of high contents of sulphur in the water, and whilst some talk of a uniquely fast re-oxygenation process, others speak of mysterious bacteriophages that latch onto and kill their particular type of bacteria – from cholera to e-coli and others, at startling rates. Basically, the understanding of her mysterious property is an unanswered question that still persists.

The practise of Hindus coming out of devotion to the Goddess Ganga and throwing many items of offering into her waters, runs deep throughout history. Some suggest that she is not actually being defiled by what is regularly termed as ‘pollution’ to our logical minds and that she actually needs organic material to make her healing waters flourish. One theory that backs this, holds that the more organic waste that is in the river, the more the bacteriophages that usually lie dormant when there are no bacteria to consume, multiply in excessive quantities, thus enhancing the quality of the water. This would mean that at the time of the Kumbh where bathing and offering is peak, her waters are at her most powerful in the healing sense and therefore it is advantageous to do so. I don’t want to go as far as saying that this would also hold true for the copious amounts of raw sewage and dead bodies that end up daily in her stream, but the theory as it stands would deem it possible.

Even if this were so, the invisible drain off of pesticides and chemicals used in the farmer’s fields pose a tremendous problem, as the mysterious bacteriophages are only able to kill their relevant bacterial hosts and not purify such artificial damage.

I went along to meet Judge Giridhar Malaviya, an ex-Judge from the High Court of Allahabad, who has been one of the active forces behind Ganga clean up, working through ‘Ganga Mahasabha’, an Indian organisation dedicated to the wellbeing of River Ganga that was set up in 1905. He tells me that the Hindus of India made an agreement with the British when they were building the Great Ganga canal at Haridwar back in those days. This stated that her stream should always remain unchecked and that no dams should ever be built on the river so that her waters would always be free flowing.

The law still holds true, but has not been respected as many dams and barrages now block her natural path. Today’s representatives of the organisation are calling for the active enforcement of this law by means of the government dismantling everything that stands in the way of her free flow.

Indeed, some say that whatever it is that constitutes the mysterious healing quality of Ganga originates at her source at Gaumukh and therefore an entire run of the river is required in order for her properties to be up to max.

Like a body that is diseased can begin to heal itself when it becomes aware of the disease, so is the mysterious power of Ganga that has made her so famous and holy, perhaps the one thing that enables her to keep on going through thick and thin. After all, water is a living creature and all living beings have some form of consciousness. This would suggest that even though she is supposedly defiled and used in so many ways, her inherent constitution will always fight to return her to that natural state of “pure water”.

But then again, the parameters have changed and we, as a human race interacting with our environment whilst transforming into modern society, struggle to understand the effects of our actions upon greater forces working to aid our basic survival.

Maybe the sages of old knew her curious methods of producing healing water and blinded by our blatant rationality, we today do not necessarily see and understand the whole picture.